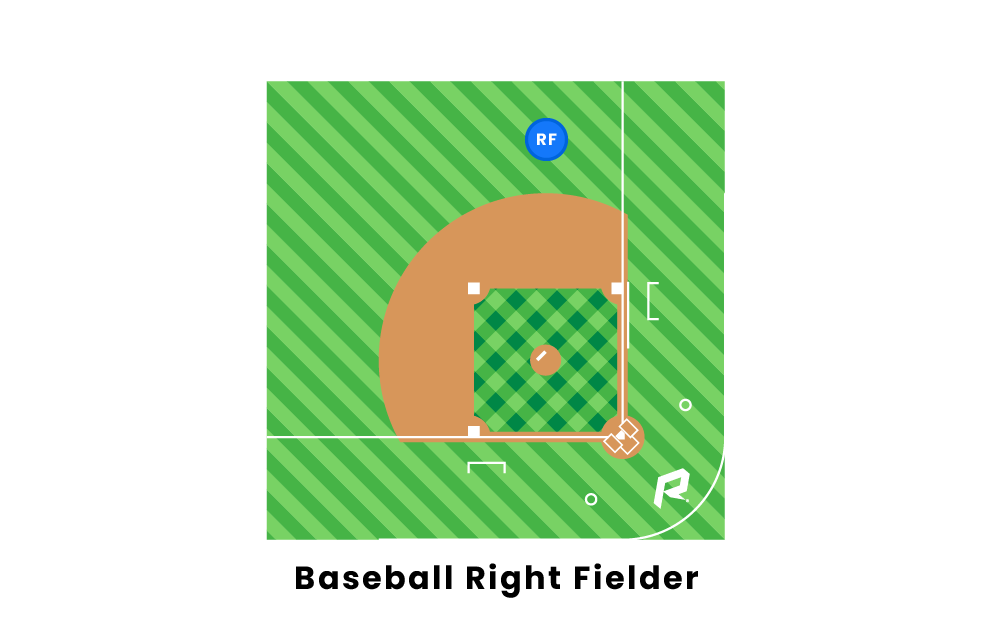 The right fielder is the 9th defensive position player (specifically, an outfielder) in charge of fielding baseballs hit into right field. They cover everything from shallow right field to the outfield fence and from right-center field to outside the right foul line. Since their coverage is extensive, right fielders must be fast runners, but typically not as fast as centerfielders.

Right fielders usually have the strongest throwing arms out of all the outfielders. By the time the baseball reaches the outfield, the base runner has usually made it past first base. Since right field is the farthest away from second base and third base, the right fielder has to make a very long throw from right field all the way to those bases. Even though fewer baseballs are hit to right field (since more batters are right-handed and pull to the left), the ability to throw for distance is still an important part of the position. 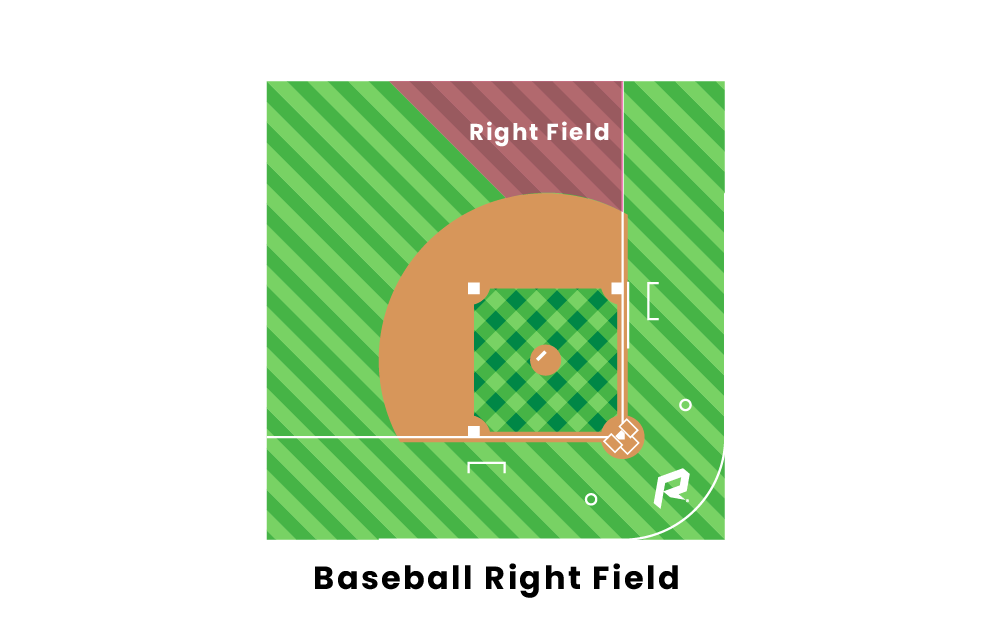 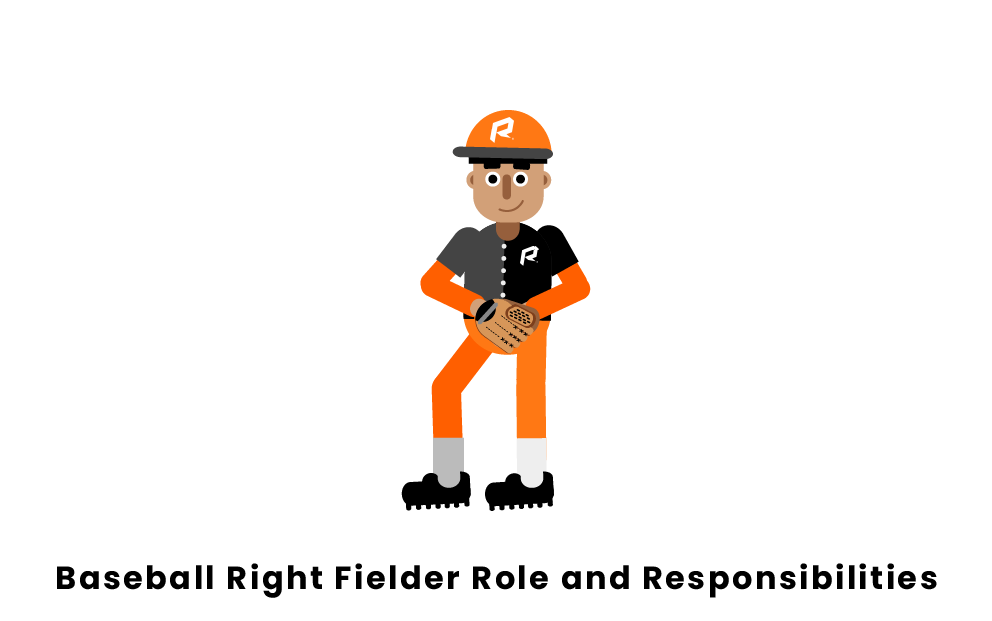 A right fielder has two main roles in baseball: to defend the right side of the outfield and hit the baseball when their team is batting.

Defensively, the right fielder is the 9th position player according to the official scorecard and needs to defend the right side of the field. This involves being able to field any balls hit into the air, which are usually described as pop-ups or line drives. They also need to field any ground balls (balls that hit the ground and are in play) that are hit at them.

However, right fielders do not usually have the same speed and range as center fielders. Center fielders are essentially the outfield captain and typically will call off either the left or right fielder if both of them are going for a ball in the air.

Right fielders need to have one of the best arms on the field and the best in the outfield. They are responsible for throwing the ball a long distance from right field to third base if a runner tries to advance there on a hit to right field. This typically happens if the ball is hit into the right-centerfield gap or down the right-field foul line. They still have to make the throw to home, but throwing to home is also required of left fielders and centerfielders.

Overall, the right field sees the least amount of balls hit to it, as most batters are right-handed and will pull the ball to left field if the hit goes to the outfield. Since fewer balls are hit to right field, it is considered a position where you typically put your least-skilled fielders, which is commonly the case at the little league level, as very few balls will be hit there.

Offensively is where typically right fielders shine, as many of the game’s best sluggers are typically put in the corner outfield spots as they are easier defensively. For a right fielder, their job offensively is the same as any of the other position players as they aim to put the ball in place and advance any of their team’s baserunners. If they also have good speed, the right fielder should also steal bases. Due to their typically great hitting, right fielders in their later years may transition to either first base or DH (designated hitter position), as first base requires less speed or movement for fielding, and DH is just hitting. 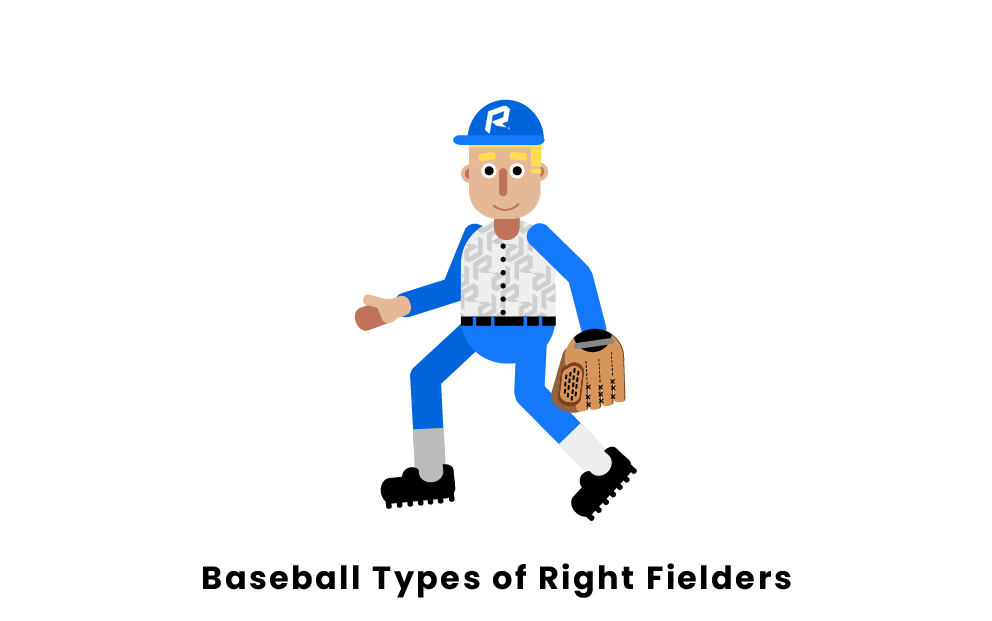 There are a few different types of right fielders in baseball who you will see play the position.

While defense is undoubtedly an important part of baseball, as far as right field goes, it’s not a priority for players to be as good defensively as it is offensively. A defensive right fielder is typically used if the manager wants to put in a good defender towards the end of the game when their team is winning. This outfielder is typically called the “Fourth Outfielder,” who can be called upon defensively in those late-game situations. The defensive outfielders are also typically faster with good dexterity. They are known as great utility players and may even play other defensive positions on the field when called upon.

As right field has been home to some of the greatest sluggers ever to play the game, there are many of them in today’s game who are great hitters. Many of these hitters are great offensive players but aren’t as good defensively, as typically, their large stature and lack of dexterity limit them. However, their offense generally makes up for their defensive lapses, which is why offensive-minded right fielders will get more playing time over their defensive counterparts. An example of this is Albert Pujols, who played outfield in his early career and was almost always a net negative defensively, yet still won MVP multiple times.

The All Around Right Fielder

This is a right fielder that is great both defensively and offensively for their team. They not only can have big hits, but also have the speed and dexterity to make great defensive plays in right field. Obviously, these players are less common to see, but they are typically among the best players. A great example of this is Mookie Betts, who has won both a silver slugger (best hitter at his position) and gold glove (best defensive player at the position) multiple times. 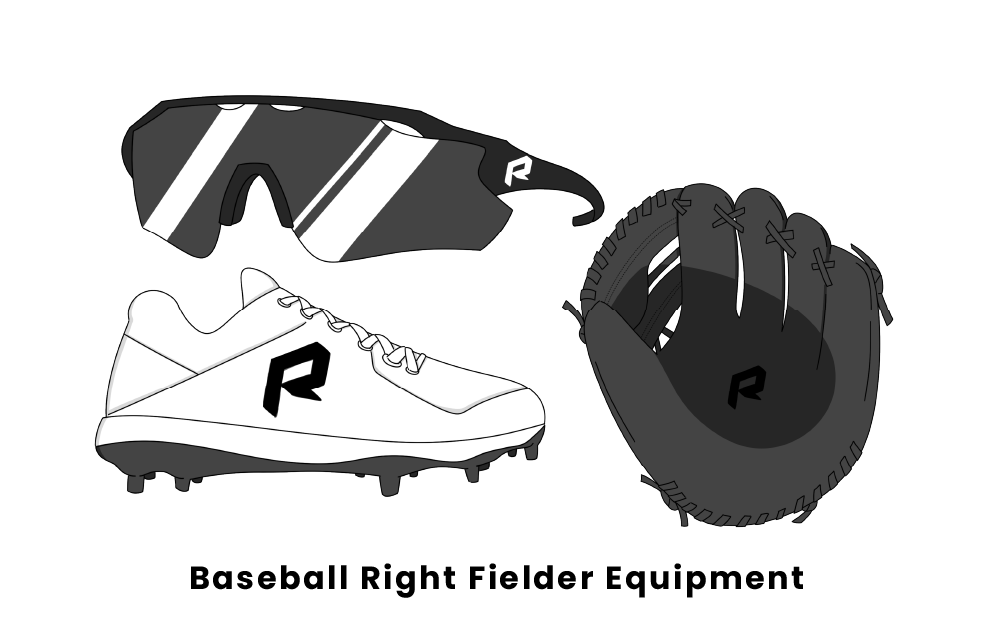 As far as equipment goes, the two most important pieces of equipment for right fielders are the glove and bat that the player uses. There are specific types of gloves designed for outfield positions. These “outfield gloves” are larger than infield gloves and have a deeper pocket along with an H-web. This allows players to have more range and reach to cover their part of the outfield. Besides this, you need a bat, but bats don’t differ typically by position but are usually based on a player’s personal preference. However, something that outfielders typically need more are sunglasses, as when trying to catch a pop-up on a sunny day, it can be difficult to see the ball and have it get lost in the sun. 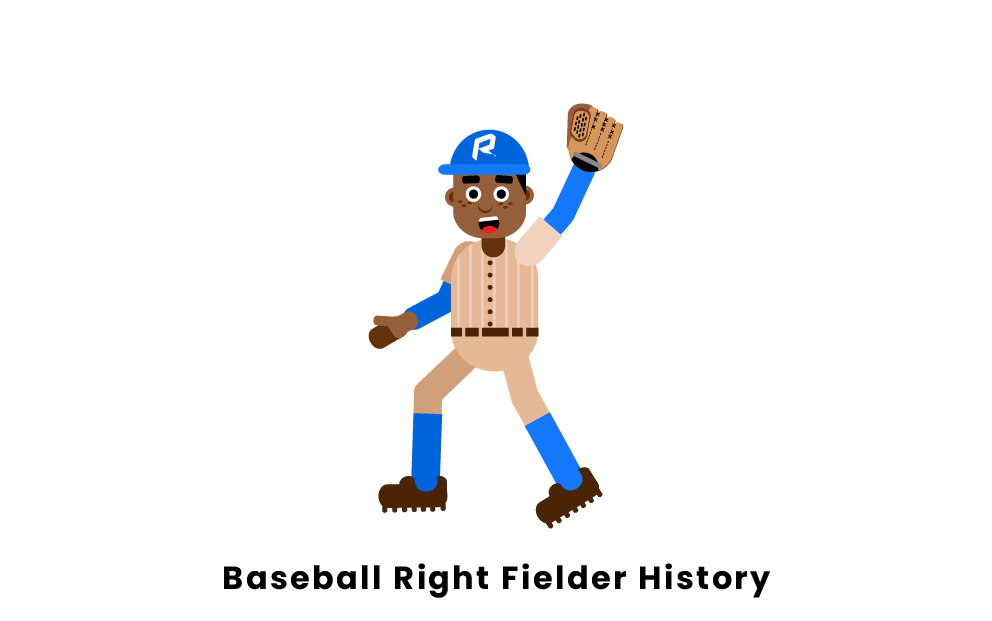 Right field has a rich history as so many great players have played the position and some of the top players today also play there. This includes two of the greatest players of all time in both Babe Ruth, who many still consider today the greatest ever to play, and Hank Aaron, who was the man to break his all-time home run record. Today, the position still has its own new stars in players like Mookie Betts and Aaron Judge, two of the top players and among the most recognizable figures in the game. 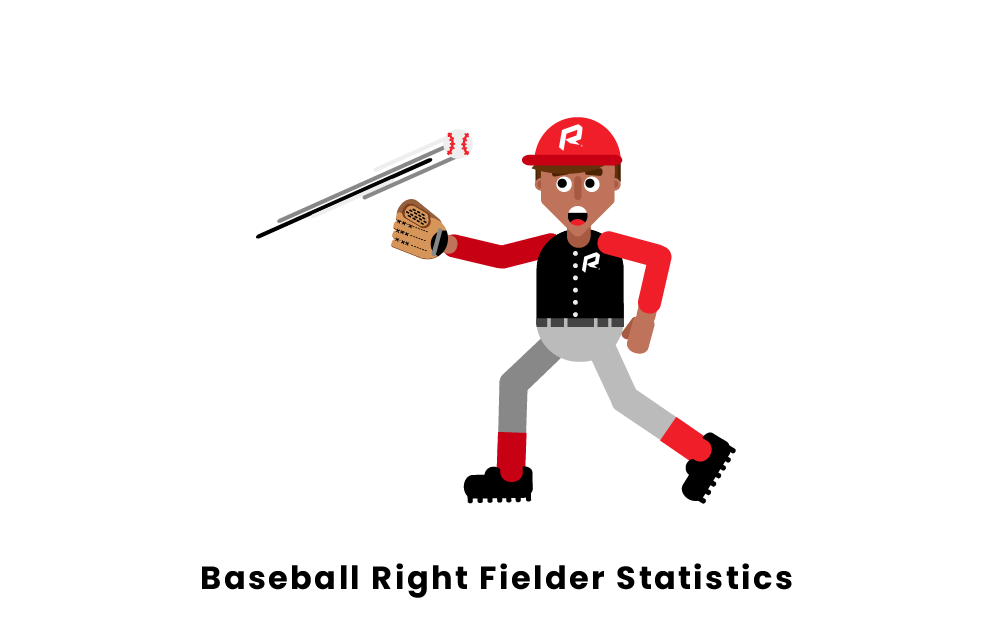 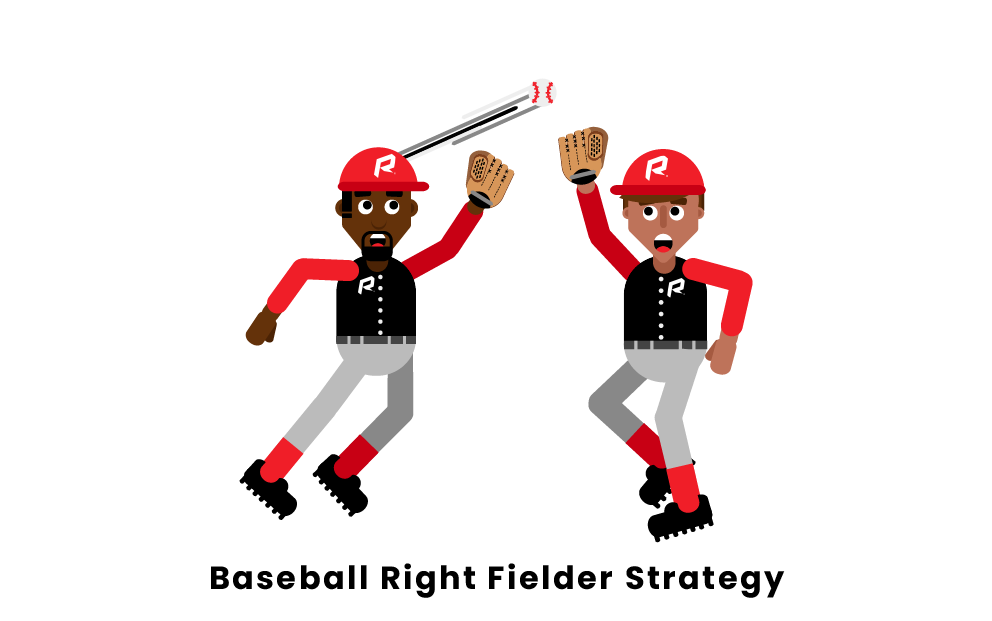 As far as strategy goes for right field, there are many things to keep in mind as you are playing the position. First, when you are going for a pop-up, you need to keep in mind who has priority when calling for the ball and when to stop going for it. For right field, this typically happens when going for a fly ball in right-center field, as the center fielder has priority. This means the right fielder should back off and allow the center fielder to make the catch if they called for it.

It is also important to know where you are supposed to back up another player. For a right fielder, this can involve backing up the centerfielder for a ball hit to center or backing up the first baseman if he moves his position during a play. Finally, a right fielder needs to know where to throw the ball, which typically involves the “cutoff man,” which is the infielder you throw the ball to. You need to know which infielder to throw to by reading where the runners are on the bases. You typically want to throw ahead of the runners. 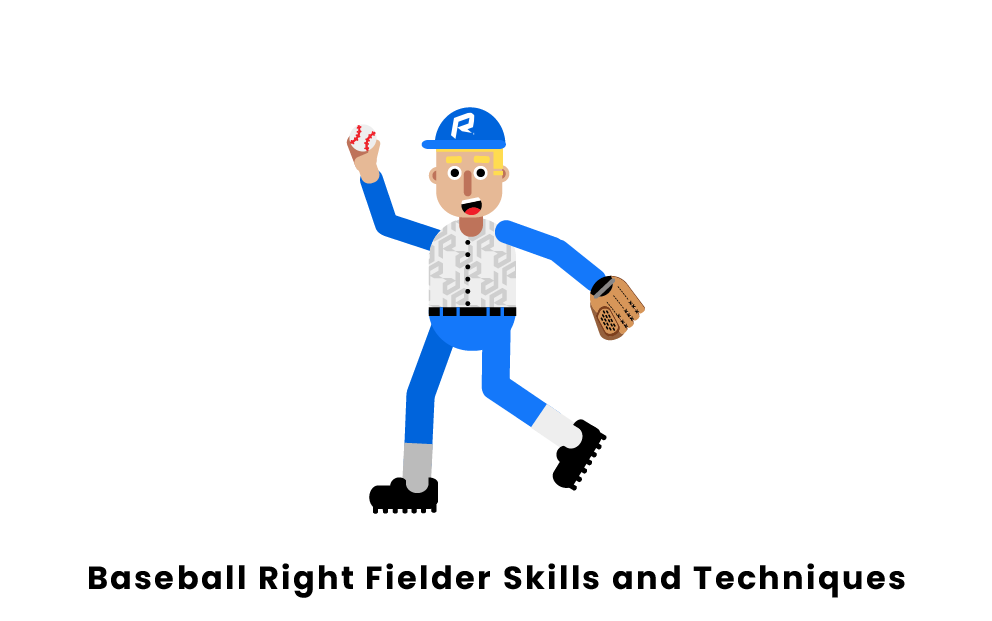 As far as skills are concerned for right fielders, they are pretty similar to that of the other two outfield positions. You need to make sure that your technique for throwing is sound, with a good grip on the ball and proper foot placement to get the best possible throw.

Another largely important skill is tracking fly balls and not losing them in the sun. One tip is to always have your first move be backward, as it is always easier to run forward towards the ball than to run backward.

Finally, one of the best tools/skills of outfielders is the use of the crow hop and long hop. The crow hop is a hop that outfielders use to get more momentum and power to their throw. Meanwhile, the long hop is throwing the ball as more of a line drive, with it bouncing about 10-15 feet in front of the person making the catch. This allows the ball to get in quicker and more accurately than that of an arcing rainbow throw.

The following table lists some of the most famous right fielders of all time that are in the Baseball Hall of Fame.

Below is a list of some of the top right fielders in Major League Baseball by team:

What is a right fielder in baseball?

A right fielder in baseball is the player who defends the right side of the outfield on defense and hits the baseball on offense.

What does a right fielder do in baseball?

A right fielder in baseball has two main jobs: to defend the right side of the outfield from the foul line to the right-center field, and to hit the baseball when their team is batting on offense.

What are the types of right fielders in baseball?

Where is right field in baseball?

Right field is located on the right side of the outfield from the perspective of a batter at home plate. It consists of the entire grass area from the right foul line to right-center field. Right fielders are in charge of covering this entire area while on defense.