MLB Teams With The Most Rings 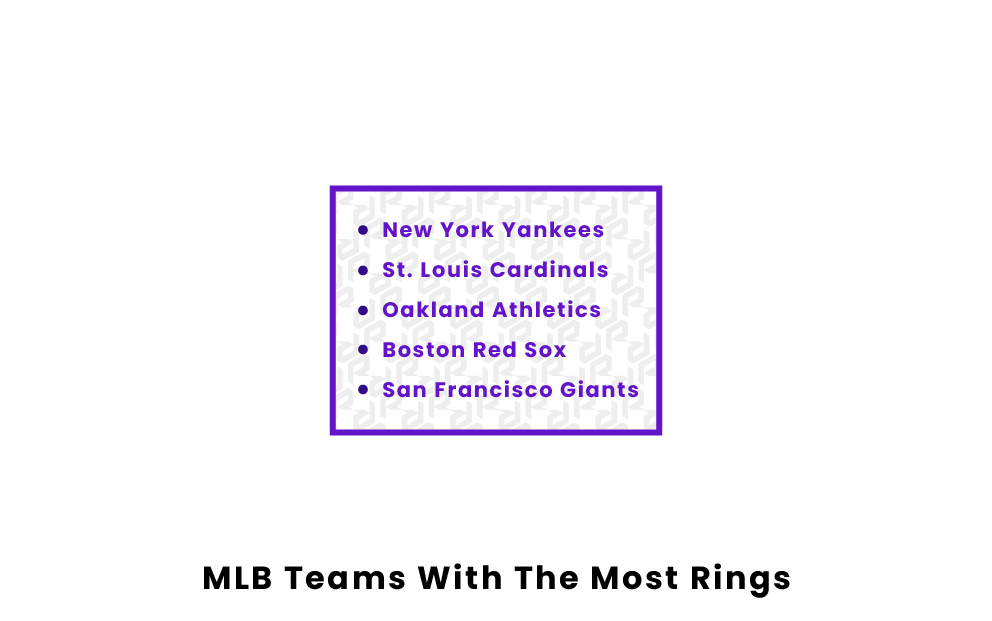 Winning a World Series in baseball is no joke. Teams have to endure a 162-game season before reaching the postseason, where they may have to play up to three rounds of baseball before reaching the pinnacle of the game. The World Series is a best-of-seven matchup between the National and American League champions, and the first team to four wins gets immortalized with a World Series ring. Keep reading to learn more about the teams with the most rings in MLB history.

Which MLB Teams have the most Championship Rings?

The St. Louis Cardinals are no slouches, having won 11 World Series titles in franchise history. Six of their rings came before 1950, but they were great in the sixties when they won in 1964 and 1967. After winning ring number nine in 1982, it was over a quarter of a century until ring number ten came in 2006. Their most recent World Series title was in 2011 against the Texas Rangers.

Although four of their rings came before World War II, the Oakland A’s also had more success as they neared the 21st century. Tied for the third-most rings with 9 rings, the A’s seemed to have one of the best teams ever at the start of the 1970s. They won three-straight rings from 1971-73, but the team was dismantled shortly after and fell back to the cellar. However, by the end of the next decade, they had returned in a big way, winning their ninth ring against their rivals across the bay, the San Francisco Giants, in 1989.

The only other team to win exactly nine rings in Major League history, the Red Sox were also similar to the A’s in that they had a lot of success very early on in the sport’s history. They won five rings from 1903-1918, but then the Curse of the Bambino came to be. After giving up star Babe Ruth to the Yankees, the Red Sox were cursed with an 86-year World Series drought. However, in 2004 they finally broke the curse, winning their sixth ring. Once the gates were opened, Boston began winning like nobody’s business, taking home another ring in 2008 and again in 2013. Their most recent World Series title was in 2018 when they defeated the Los Angeles Dodgers.

Coming in at fifth all-time with eight rings, the San Francisco Giants are one of the most successful teams ever in Major League Baseball. They won their first five rings as the New York Giants, not to be confused with the football team. After moving to San Francisco, the team wouldn’t win another title for over half a century, but a peculiar trend emerged when they finally did. Winning rings in 2010, 2012, and 2014, Giants fans began proclaiming the luck of the “Even Year,” as San Francisco was winning on every even-numbered year. That streak stopped in 2016, but the franchise remains cemented in the record books as one of the best ever.

Which MLB player has the most rings?

In all of Major League history, the player with the most rings is Yogi Berra, with 10. Berra was a catcher for the New York Yankees from 1946-1965, and his ten World Series titles with the team are the most all-time. A three-time MVP, 18-time All-Star, and Hall of Fame member, there’s no question Berra earned all of his championships.

Which MLB team has the most rings?

The New York Yankees have the most rings in MLB history. The Yankees have won 27 titles in league history, 16 more than the second-place St. Louis Cardinals. There’s no question that they are the best and most successful franchise in the history of the sport, and their most recent ring came in 2009 against the Philadelphia Phillies.

Pages Related to MLB Teams With The Most Rings