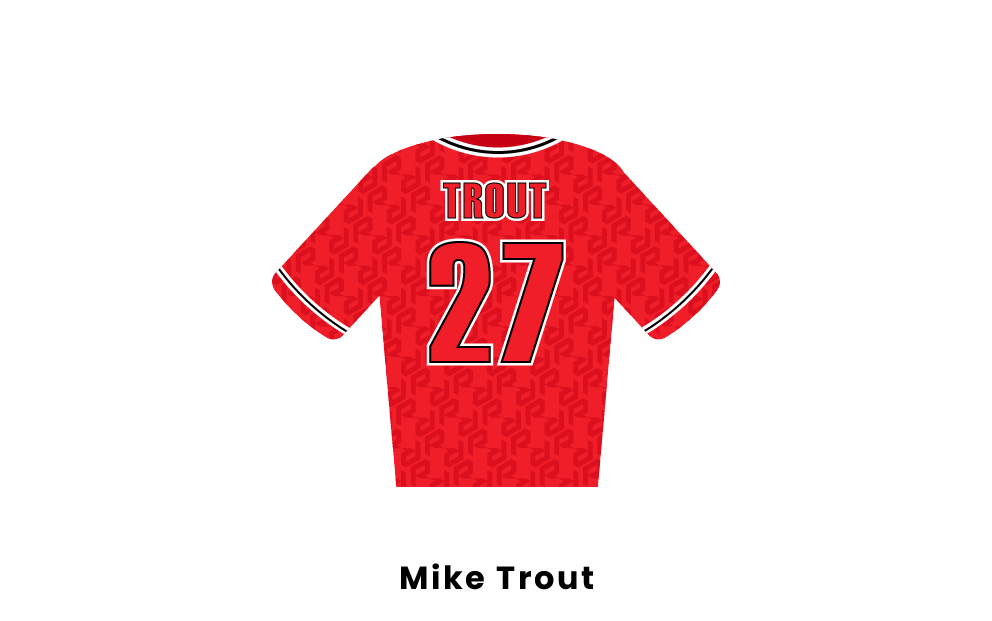 Mike Trout is a professional MLB baseball player for the Los Angeles Angels. He is a tremendous outfielder, and is widely considered to be one of the best players in the sport. The Angels drafted Trout straight out of high school, and the young phenom made his major league debut at the age of 19. Trout has had one of the greatest young careers of any player in baseball history since his call up to the big leagues. Mike Trout has already solidified himself in the history books, and he is just entering the prime of his career.

In addition to being an exceptional ballplayer, Trout carries himself as a professional leader on and off the diamond. Teammates and coaches are credited as saying that Trout brings energy to the ballpark every single day, since he has such an incredible love for the game.

Mike Trout is an established force in baseball, and is on track to go down as one of the greatest baseball players of all time. Mike was a baseball stud at Millville Senior High School, which led the Los Angeles Angels to select him in the first round of the 2009 MLB draft. Mike Trout made his first big league appearance at the age of 19, during the 2011 season. Trout has been a mainstay in the Angels lineup ever since. Excluding the COVID-shortened 2020 season and an injury-riddled 2021 season, Trout has never finished lower than 4th in AL MVP voting.

Mike Trout possesses an incredible all-around skill set on offense and defense. On offense, Trout is a disciplined hitter who consistently has one of the highest on-base percentages in the league. Trout is lightning quick, which makes him a formidable base-stealer. In addition, his strong frame allows him to hit for power. Also, Trout possesses incredible defensive instincts, making him an elite MLB outfielder.

During Mike Trout’s first full big league season in 2012, he qualified for the AL All-Star team and won the AL Rookie of the Year. Trout also finished second in the AL MVP voting during his rookie campaign. Since 2012, Trout has finished at least top 4 in AL MVP voting in each of his eight seasons played in the majors. He has won MVP three times, in 2014, 2016, and 2019. Trout is also tied for second all-time with seven Top 2 MVP voting finishes.

Trout is a perennial All-Star, having only missed selection to the Midsummer Classic once, in 2011, when he was 19 and had only played in 40 games. He won back-to-back All-Star game MVP awards in 2014 and 2015. Trout has also won eight Silver Slugger awards and two AL Hank Aaron awards. The Silver Slugger is awarded to the best offensive player at each position, while the Hank Aaron Award is given to the best overall offensive player in each league.

As a kid, Mike Trout was taught the game of baseball by his father, Jeff Trout, who played professionally in his prime. Trout learned the importance of patience at a young age. Mike possessed strength and speed that could not be taught, and he went on to become one of the best baseball players in the country.

Once Trout became a prominent player in the MLB, countless companies were offering Trout sponsorship deals. Trout partnered with Nike to create his own brand of shoes. Outside of the athletic world, Trout has endorsement deals with the food brands SuperPretzel and Subway. He also became an investor in the widely popular sports drink Bodyarmor SuperDrink.

Is Mike Trout the best player in baseball?

Most baseball analysts consider Mike Trout to be the best player in baseball. Of course, it is hard to compare everyday position players to pitchers, but Trout definitely makes a sound argument for being the best player on the planet. Part of the reason Trout is so highly praised is because his statistics have been consistently outstanding throughout all 12 seasons of his career. Most players start to slump as they age, but Trout has continued to improve each season.

Is Mike Trout right-handed or left-handed?

Mike Trout bats right-handed and throws with his right hand. Players who bat left-handed have an advantage at beating out ground balls because they start a step closer to first base. However, Mike Trout has one of the quickest home-to-first speed times in the league, and he is a righty. In addition, Mike Trout has made countless incredible plays in the outfield where he dives across his body to make the catch.

How many teams has Mike Trout played for?

Mike Trout has only played for one MLB team his entire career, the Los Angeles Angels. The Angels drafted him in 2009, and he has been part of their organization ever since. In addition, Trout will presumably be an Angel for a long time, because he signed a 12-year contract in 2019 with the team. Rumors have circulated that Trout wants to play for his favorite childhood team, the Philadelphia Phillies, but his contract extension silenced those speculations.

Where is Mike Trout from?

Mike Trout grew up in Millville, New Jersey. Interestingly enough, Trout’s father, Jeff, also played baseball at Millville High School. Once Jeff’s baseball career came to a close, he decided to start a family in his hometown. Mike Trout quickly became a baseball star and went on to break all the records that his dad had previously set at Millville. Trout is proud of where he comes from, and promotes his hometown on social media.