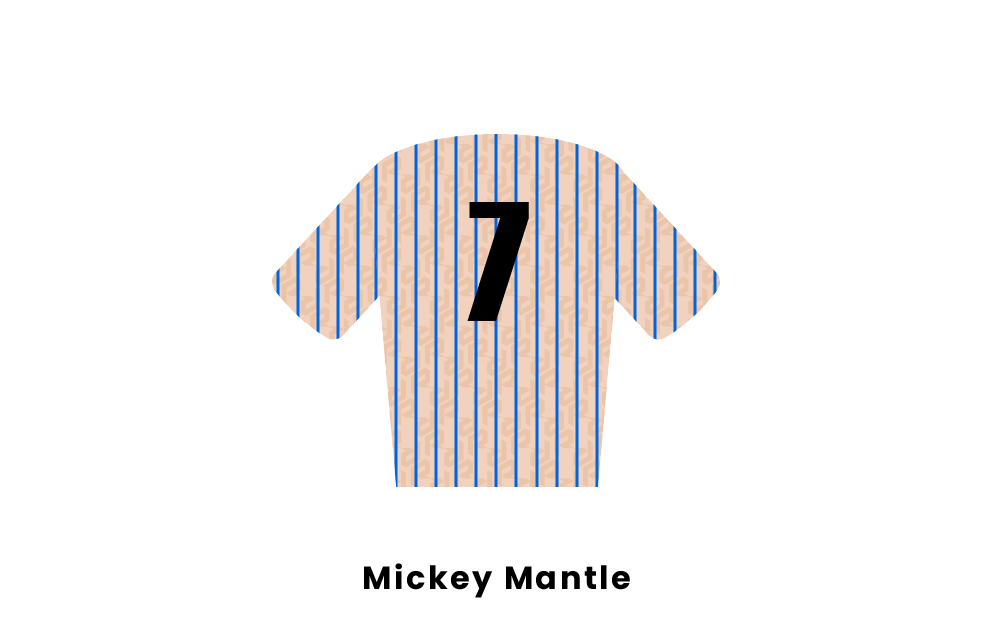 Mickey Mantle was a professional American baseball player for the New York Yankees. He played center field for the majority of his career, as well as first base, and played all 18 of his career seasons with the Yankees (1951-1968). Throughout his time in the major leagues, Mantle won the World Series seven times and was named Most Valuable Player three times.

Mantle was known as an incredible batter on the diamond. At a young age, he learned to be a switch-hitter, making it much easier for him to hit from both left and right-handed pitchers. Even though he suffered several injuries to his legs, Mantle could hit the ball like no other. He maintained an impressive batting average throughout his career and retired with a total of 536 career home runs. He is remembered as one of the best Yankees and baseball players of all time.

Mickey Mantle began playing baseball at a young age where his father taught him to be a switch-hitter. At Commerce High School in Oklahoma, Mantle played baseball, basketball, and football. During this time, he was scouted by the New York Yankees and signed a contract with the team.

In 1949, Mantle began to play for the Yankees’ minor league affiliate baseball team in Independence, Kansas, the Independence Yankees. He played as a shortstop for the Independence Yankees for two years. However, following some defensive difficulties, he was moved to the outfield. In 1951, Mantle was pulled up to play in the major leagues for New York. However, his play in right field for the New York Yankees did not impress the New York coaches, and he was sent back down to the minor leagues, this time to the Kansas City Blues, another Yankees farm team.

After the 1951 season, Joe DiMaggio retired from the Yankees, and Mantle was pulled up to take his spot as a center fielder. He experienced immediate success on the team and spent the rest of his 18-year career with the Yankees.

During his career with the New York Yankees, Mickey Mantle was very successful. In 18 years with the team, Mantle hit a total of 536 home runs. He was also voted Most Valuable Player of the American League in three different seasons (1956, 1957, and 1962). In addition to winning MVP in 1956, Mantle also was awarded the American League Triple Crown in 1956 for recording 52 home runs, 130 runs batted in (RBI), and a .353 batting average.

In addition to these accomplishments, Mantle led the American League in home runs in four different seasons (1955, 1956, 1958, 1960) and ranked in the top ten in 13 different seasons. He received numerous awards, such as the Hutch Award in 1965 and the American League Gold Glove Award in 1962. On top of all this, Mantle was an All-Star 20 times, won seven World Series titles with the Yankees, had his number 7 retired by the Yankees, and was inducted into the Hall of Fame in 1974.

Mickey Mantle was born in Spavinaw, Oklahoma and raised by parents Elvin (“Mutt”) and Lovell Richardson Mantle. Mantle’s father Mutt was a former semi-pro baseball player and taught Mickey to play from a young age. In fact, Mantle was even named after the Detroit Tigers catcher Mickey Cochrane.

After his retirement from the Yankees, Mantle pursued a career in business, opening his own restaurant, and even served as a television commentator that broadcasted New York Yankees games. In addition, he spent some time working in the public relations department for a casino in Atlantic City, New Jersey.

In the 1950s, Mantle married his wife Merlyn and had four sons with her before they separated in 1988. Unfortunately, his son Billy was being treated for Hodgkin’s Disease, and passed away in 1994 due to heart failure.

Partially as a result of his frequent drinking, a habit he struggled with for 42 years, Mantle was diagnosed with Hepatitis C and liver cancer, and died on August 13, 1995.

Did Mickey Mantle experience any injuries during his career?

Mickey Mantle experienced several different injuries throughout his career. As an infant, he was affected by a form of paralysis that made his legs weak. In high school, Mantle developed osteomyelitis, a bone infection of his shin and ankle. After entering the major leagues, he suffered a host of other injuries to his shoulders, rib cage, hips, feet and ankles, and several knee injuries that required surgery. In 1956, Mantle even underwent a tonsillectomy.

What was the longest hit Mickey Mantle ever recorded?

Mickey Mantle hit his longest measured home run on April 17, 1953 in Washington, D.C. at Griffith Stadium a whopping 565 feet. Because of its extensive length, the home run was measured using a measuring tape and resulted in the term “tape measure home run.” In addition, it was the only regular season home run to make it over the left-field bleachers at the stadium.

What was the largest contract Mickey Mantle had?

Mickey Mantle signed his largest contract with the New York Yankees in 1963. The contract was worth a total of $100,000. Joe DiMaggio was the only other player in history to sign a contract as lucrative as this one. In fact, Mantle requested to keep his pay at the same level for the remainder of his career because he believed it would be disrespectful to make more money than DiMaggio.

Where did Mickey Mantle hit most of his home runs?