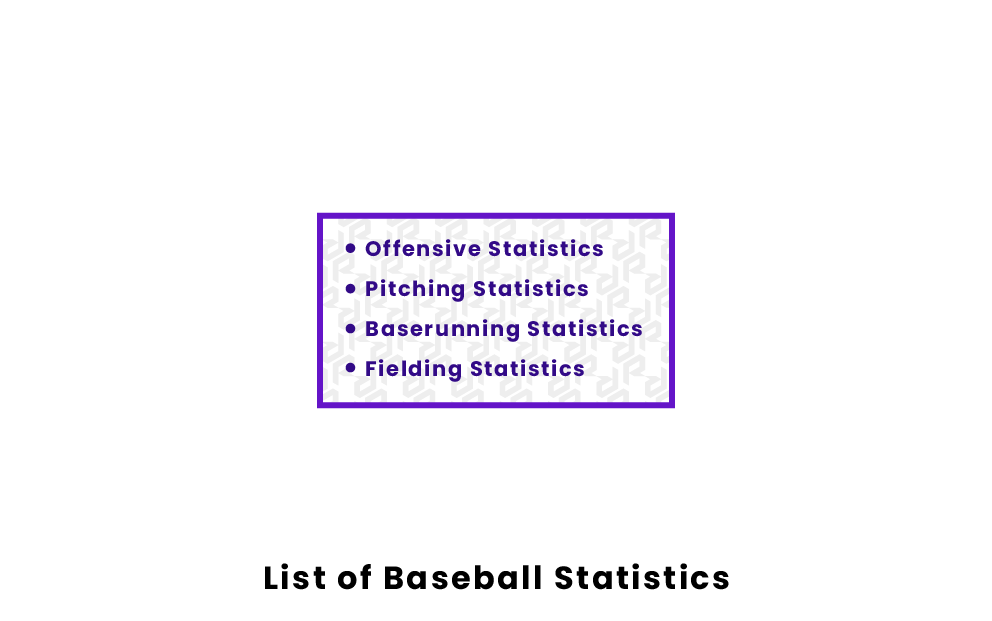 Baseball is simple and attractive to players and fans of all ages. The objective of swinging a bat to hit the ball is understood by most, but there are many more factors that go unnoticed. This article defines the various statistics within the game, to help you become more knowledgeable about the great sport of baseball!

The number of times that a player steps to the plate against a pitcher regardless of the outcome. After there is any completed outcome from the player, it goes into the statistics as one plate appearance. Some outcomes include an out, hit, walk, error, hit by pitch, as well as a sacrifice, which is a bit more complex.

When a player's plate appearance results in a specific outcome such as an out, hit, error, or fielder's choice. Outcomes such as a walk, hit by pitch, or sacrifice are not considered "official at-bats," only plate appearances. It is key to know the difference between the two because they are not interchangeable, yet both are necessary to calculate certain statistics.

This statistic is based on the math equation "hits divided by at bats (H/AB)" and represented in three decimal form. It has a scale from 0 to 1 (the higher the number, the better) and can help show the player's hitting success. Typically when discussing a batting average, the decimal is dropped and read as a whole number. For example, the phrase "Mike Trout is batting 300 this year!" means that Mike Trout has 3 hits in 10 at-bats, a .300 batting average.

On Base Percentage (OBP)

A type of hit where a batter reaches first base safely, without a fielding error.

A type of hit where a batter reaches second base safely, without a fielding error.

A type of hit where a batter reaches third base safely, without a fielding error.

A type of hit where a batter reaches home plate safely, without a fielding error, resulting in a run scored.

A player is rewarded with an RBI when the outcome of their plate appearance results in a run scored for their team. If a run scores because the player grounded into a double play (two outs in one play), or due to a fielding error, they do not get credited with an RBI.

This pitcher starts the game for their team, typically pitching multiple innings until a new pitcher is brought in.

Refers to any pitcher who enters the game after the starting pitcher has been taken out.

Also known as appearance, a pitcher is credited with a game played when they enter the game.

Number of times a player has been the first pitcher of the game.

A pitcher is awarded a complete game if they pitch the entirety of the game without being replaced by another pitcher.

A pitcher is credited with a strikeout when they achieve three strikes on a batter during a plate appearance.

Walk or Base on Balls (BB)

When a pitcher throws four balls during a plate appearance, the batter is awarded first base.

The number of outs a pitcher gets for their team, divided by three. One full inning consists of three outs, therefore when a pitcher records three outs, they are credited with one Inning Pitched. (1 IP) A complete game of baseball has nine innings.

The number of runs a pitcher allows, not including runs scored due to team errors

When a player is able to advance to another base while the defense has the ball, they are awarded a stolen base.

When a player is attempting to steal a base and is tagged by the defense prior to reaching, the result of the play is an out.

The number of times a player has successfully stolen a base divided by their total attempts.

A player scores a run for their team if they are able to reach home plate safely prior to a fielder tagging them with the ball.

Refers to the number of times a defensive player gets the ball and tags the runner or base prior to the opponent reaching, resulting in an out.

When a defensive player contributes to getting an opponent out by touching the ball, they are awarded an assist.

When a defensive player is unable to record an out on a play that should commonly result in an out, they are awarded an error. The official scorer of a baseball game decides if an error has occurred and who should be credited with it, based on the play in question.