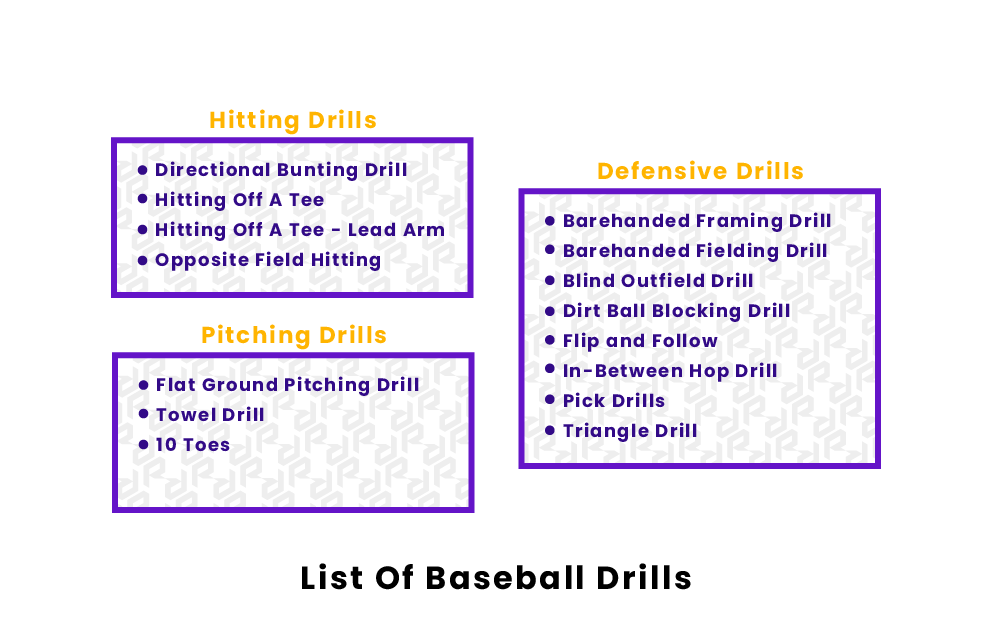 Throughout all levels of amateur and professional sports, drills are an essential part of refining one’s skills in an effort to improve as a player. In the sport of baseball, there are all sorts of drills, spanning from pitching and catching to defense and hitting. These drills are designed to improve some specific part of your game, and all of them are unique in their own way. In this section, we’ll go over some of these unique baseball drills that coaches and players use all across the world, emphasizing the effect the drill has on the performance of the player.

Directional bunting drills task the hitter to be extremely precise on their bunts, as the coach provides targets that the players tries to hit upon successfully bunting the ball. By doing this, players are able to hone in on a specific location as opposed to a general direction, which increases the player’s chance of executing a successful bunt during the real game.

Hitting Off A Tee

Hitting off of a tee is one of the most popular hitting drills in all of baseball because of its simplicity. All that is required to perform this drill is a metal or rubber tee that props up the ball to a desired height, just waiting to be hit in the batting cage. Once the baseball is placed on the tee, the player can make their normal swing, focusing on a specific aspect of their swing in a controlled environment.

Hitting Off A Tee - Lead Arm

This drill incorporates the same basic concept as the standard “hitting off a tee” drill, except instead of using both hands and making a full, normal swing, the player will use only their lead arm (left for righties, right for lefties). This slight change forces the player to extend through the ball and is extremely useful to hitters who tend to cast the barrel out across their body and roll over the ball.

In this type of drill, the ballplayer purposely tries to hit the ball to the opposite field (right field for righties, left field for lefties) in order to prevent the common hitting mistake of overswinging. Opposite field hitting drills are not too specific, as they can be utilized in accordance with soft toss, tee work, or live pitching. However, they deserve to be an individual drill on this list because they are so heavily utilized in the modern game.

The flat ground pitching drill is a common instructional task that is designed to simplify the pitching motion by having the pitcher throw a full bullpen without the mound. By throwing from an even surface, the pitcher can work on their downhill pitching motion, so when they transition back to the mound, they are able to explode down the mound more efficiently.

Possibly the most talked about pitching drill of all time, the towel drill is designed to help pitchers snap through the bottom of their delivery with the help of a few key items: a towel and a bucket. To perform the drill, the player will hold a towel in their throwing hand (no baseball is used) and subsequently go through their full pitching motion. However, instead of throwing a ball, the pitcher will try to extend their arm down and through the air so much that the towel hits a bucket that sits 8-10 feet in front of the pitcher.

The ten toes drill begins with two players throwing the ball together with their feet facing one another. From there, the players will twist their body, bring their arm back, and throw the ball to their partner without moving their feet. By doing this, the pitcher must stay balanced throughout the entire motion, allowing them to adjust their arm slot if they need to.

The barehanded framing drill is one of the most common drills for catchers. To perform this drill, a coach will continually toss baseballs to the catcher, who is ready to receive the ball without a ball in their hand. This action reinforces the idea of framing the ball with your hand (not your glove) to get a more complete feel of the baseball once the player puts the glove back on.

The barehanded fielding drill is one of the most common drills for infielders looking to improve their defensive skills. This drill requires a coach or surrounding player to roll the ball across the dirt to an adjacent fielder, who then fields the ball without their glove in hand. As a result of this simple procedure, fielders are better able to keep their glove down on ground balls once they put their gloves back on.

Usually used as a fun, end of practice drill, the blind outfield drill is a great way to practice difficult, full-speed catches in the outfield. Coaches can conduct this drill by lining up their players in the outfield, and one by one, hitting/throwing the ball to the players who have their backs turned to the play. The player will turn as soon as the ball is thrown, running after and hopefully catching the ball in whichever direction it went in. This drill is supposed to test instinct and lateral movement toward the ball.

Along with the barehanded fielding drill, the dirt ball blocking drill is another essential catching drill for defensive development. To execute this drill, a pitcher, coach, or pitching machine must purposely wield the ball into the ground in the direction of the catcher multiple times in a row. From there, the catcher is tasked with continuously blocking the ball in an effort to improve their defensive technique.

The flip and follow is a middle infield drill that helps middle infielders (shortstops and second basemen) provide good feeds to their teammates when trying to turn a double play. The performance of the flip and follow drill is quite simple. All the player must do is field a normal ground ball cleanly and flip the ball to second base, overemphasizing the flip by following their throw an extra couple of steps once they release the ball. By doing this drill, players are less likely to get quick with their flips to second, allowing them to be more accurate in the real game.

Dubbed the toughest type of baseball to field, the in-between hop is one that lands 5-10 ft in front of the fielder, creating an awkward fielding motion. Because of this fact, it’s essential to practice this type of motion with in-between hop drills, which involve purposely hitting the ball to areas that will cause this type of awkward hop. As a result, the fielder can gain more refined instincts around baseballs that come at them from difficult angles.

Pick drills are heavily utilized across all infield positions, as improving your short hop/pick skills are essential in today's game. The easiest way to practice this motion is through a simple pick drill, which occurs when a player or coach purposely throws the ball on the ground underneath the player’s glove. As a result, the fielder must field through the ball in order to catch the ball cleanly and get off a throw.

The triangle drill is a common way to reinforce the idea of getting into a good fielding position in the infield. To perform it, all the player must do is set up in a fielding position with their legs spread out and their glove near the ground in front of them. From there, a coach or teammate will roll a ball to the player, forcing them to stay in the fielding position for longer than expected. By doing this repetitively, the player’s muscle memory in regards to their fielding position will be much better by the time they get in the game.