How Much Does An MLB Umpire Make? 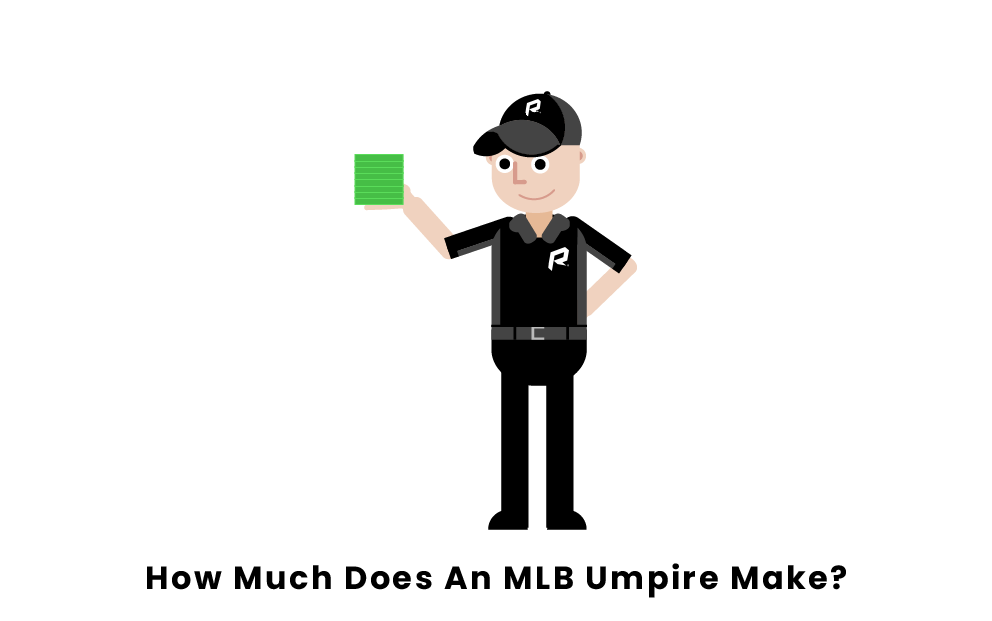 Being an MLB umpire is not for the faint of heart. The job includes endless heckling, criticism by coaches and players, and having to make split-second calls with perfect precision. MLB umpires may be among the most disliked figures in all sports, so it figures that the league would compensate them well. Read more to learn how much an MLB umpire makes during a season.

For the 2022 season, the average salary for an MLB umpire is $235,000. Rookie umpires start with an annual salary of $150,000, whereas more experienced umpires can make upwards of $400,000 a year. The number may seem astronomically high, but there are a few reasons why MLB umpires make so much.

They may work up to 142 games during the regular season and must closely watch the entirety of the game at hand, which can last three hours or more. In addition, umpires are tasked with making several close calls throughout the game, often on fast-developing plays. The average velocity of a baseball put in play is 87 mph, and players in the field can throw the ball at speeds up to 95-plus mph. Factor in some of the sport’s quickest players flying around the bases, and you end up with many bang-bang plays that require sharp reflexes and immediate rulings from umpires.

Salaries Compared to Other Sports

MLB umpires are responsible for officiating the highest number of games out of any sport, so it makes sense that they get paid the most. While the average salary for MLB umpires is $235,000, officials in the NFL make $190,000, and referees in MLS make only about $40,000 on average. The only sport where officials are paid more than MLB is the NBA, where the average referee’s salary is $375,000. Though umpires make a lot, their salaries don’t seem as great, considering that the MLB season is twice as long as the NHL and NBA. Whereas an NBA referee can average nearly $5,000 per game, umpires average just $1,500. Though it’s still a handsome paycheck, there’s no denying that umpires have one of the toughest jobs in sports.

Becoming an umpire in Major League Baseball is extremely difficult. There are only 70 umpires currently in MLB, and they only get to the big leagues after spending years umpiring the lower levels of baseball. The average age of an MLB umpire is 50 years old, and many umpires in the game today have over 20 years of experience.

Who is the highest-paid MLB umpire?

The highest-paid MLB umpire in history was Joe West, with a salary of $450,000. West was one of the most infamous umpires in baseball, as he was the longest-tenured official in the sport prior to his retirement in 2022. However, West received routine criticism from players, coaches, and media members. West umpired for Major League Baseball for 45 seasons. Since umpire salary is seniority-based, West currently remains the highest-paid umpire in MLB history, even though he is retired.

How much do MLB umpires make for calling the World Series?

MLB umpires make $20,000 for calling the World Series. Being a World Series umpire is a prestigious honor, and those in the position to do so have the responsibility of officiating the biggest baseball games of the year. Millions of fans tune in to every game, so there are plenty of eyeballs on every call that a World Series umpire has to decide on, making it a very stressful position with very high stakes.

Is an MLB umpire a full-time job?

Yes, being an MLB umpire is a full-time job. Most umpires take a break during the offseason as they get ready for the next year. Since the season is so long and is filled with so many games and a lot of traveling, an MLB season can be very taxing on umpires. With a minimum salary of $150,000, most umpires are able to live comfortably without the need for a second job.

Pages Related to How Much Does An MLB Umpire Make?