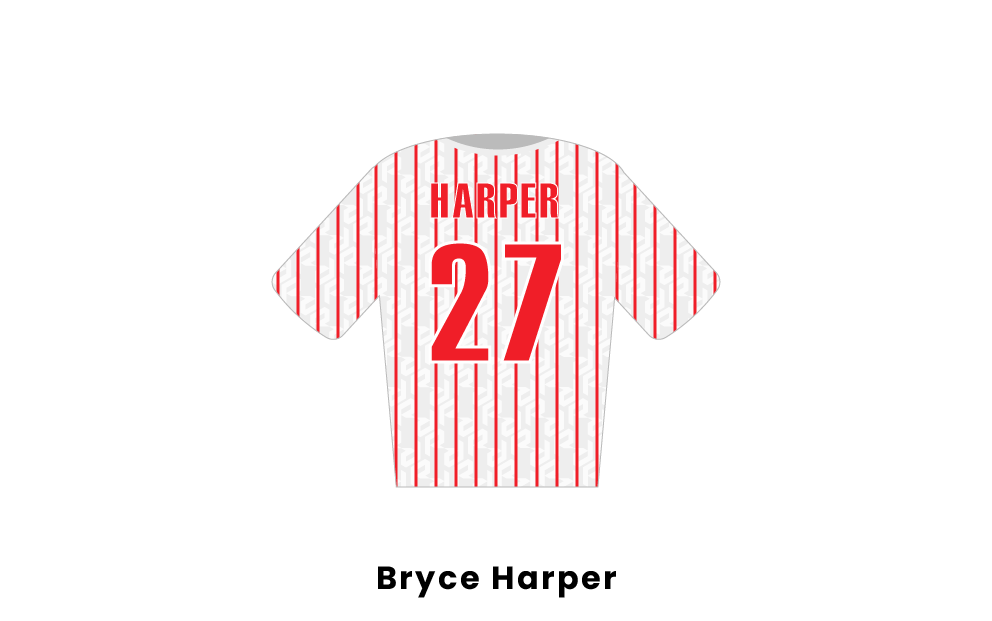 Bryce Harper is a Major League Baseball (MLB) player that is currently a member of the Philadelphia Phillies. Harper was drafted with the first overall pick in the 2010 MLB Draft by the Washington Nationals and has played in the major leagues for over ten years. The left-handed right fielder is one of the best in the game.

Since he was a kid, Bryce stood out as a naturally gifted baseball player. He played for his Las Vegas High School and the College of Southern Nevada. When signing his first deal with the Nationals, he was contracted for five years at $9.9 million. Over those five years, he was recognized for his superior talent and was named to several All-Star teams, in addition to receiving dozens of other awards. In 2019, he signed a 13-year, $330 million deal with the Philadelphia Phillies, the largest deal in MLB history at the time.

Bryce Harper started playing baseball at a young age and played on both his high school team at Las Vegas High School and college team at the College of Southern Nevada. He was a breakout star in college, breaking his school’s record for the most home runs and winning several awards for his outstanding performance. He did have a major setback when he was suspended, but that did not stop him from achieving greatness.

Harper was selected as the first pick by the Washington Nationals in the 2010 MLB draft. He debuted in the MLB in 2012 after playing in the minor league for two years. He has been widely respected for his amazing defense and stellar batting average during his career. He has been known to hit towering home runs and lead his team in scoring. In 2019, the Phillies signed Bryce Harper to a 13-year, $330 million contract. Harper has performed exceptionally for the Phillies ever since, winning the NL MVP award in 2021 and leading them to a World Series appearance in 2022.

Bryce Harper received recognition for breaking the  College of Southern Nevada’s home run record in college. He also received the SWAC Player of the Year award and Golden Spikes Award for his outstanding performance.

Since entering the MLB, Bryce has been awarded in various ways as one of the top players in the league. In 2012, Harper received the NL Rookie of the Year Award in his breakout season. He has also been named an NL All-Star six times during 2012, 2013, 2015, 2016, 2017, and 2018. In 2015, Harper was named the NL MVP and received the NL Silver Slugger award for being the best offensive player at his position. He repeated this feat in 2021, being recognized as the NL MVP and winning the Silver Slugger Award once again, as well as making the All-MLB First Team.

In addition to these awards, Harper has also received some other smaller acknowledgments. He has been named NL Player of the Month, Player of the Week, and Rookie of the Month a total of eleven times. He received the NL Hank Aaron award in 2015 and 2021 for being the top hitter in his league and won the Home Run Derby in 2018. In 2022, Bryce Harper made his first World Series appearance with the Philadelphia Phillies and earned the NLCS MVP award.

Bryce Harper was born on October 16th, 1992, in Las Vegas, Nevada, to his parents, Sheri and Ron Harper. He grew up being close with his two siblings, Bryan and Brittany. From a young age, Harper was fascinated by baseball. He played for his high school team and was immediately singled out as the team star. Harper was photographed on the cover of Sports Illustrated in May 2009, being positively compared to Lebron James.

He then played baseball at the College of Southern Nevada in the National Junior College Athletic Association. He broke the school’s record for most home runs and was awarded SWAC Player of the Year and the Golden Spikes Award during his time there.

In 2016, Harper married his high school sweetheart Kayla Varner after a long engagement. They welcomed their first son, Krew Aron Harper, in 2019 and are still happily married. In 2020, the couple had their second child, a daughter named Brooklyn Elizabeth Harper.

Bryce Harper has primarily played right field throughout his MLB career. In 2022, he transitioned to playing as a designated hitter for the Phillies after dealing with a forearm contusion and fractured left thumb that prevented him from throwing in the outfield. Throughout his career, he has also played center field, left field, and first base occasionally.

Which MLB teams has Bryce Harper played for?

Bryce Harper has played for the Washington Nationals and Philadelphia Phillies in the MLB. He was selected by the Washington Nationals as the first overall pick in the 2010 MLB draft. After joining the team, the Nationals changed his roster status, and he was moved around on five different minor league teams. In April 2012, Harper made his MLB debut and was a huge success for the Nationals franchise. In March 2019, Harper signed the largest contract in MLB history for 13 years and $330 million with the Phillies.

What is Bryce Harper’s net worth?

Bryce Harper has an estimated net worth of $70 million. He has signed two large deals with MLB franchises that have contributed to his net worth, as well as lucrative endorsement deals with companies like Under Armour, Gatorade, and Dairy Queen. When Harper was drafted to the Washington Nationals in 2010, he signed a five-year, $9.9 million deal. Most recently in March of 2019, Harper signed a 13-year, $330 million deal with the Philadelphia Phillies.

Where is Bryce Harper from?

Bryce Harper was born on October 16th, 1992, in Las Vegas, Nevada. He grew up in Las Vegas with his parents and two siblings. He attended Las Vegas High School, where he played on the baseball team, and later went to the College of Southern Nevada as well. It was not until the Washington Nationals signed him that he finally left Las Vegas and began his career as a major league baseball player.