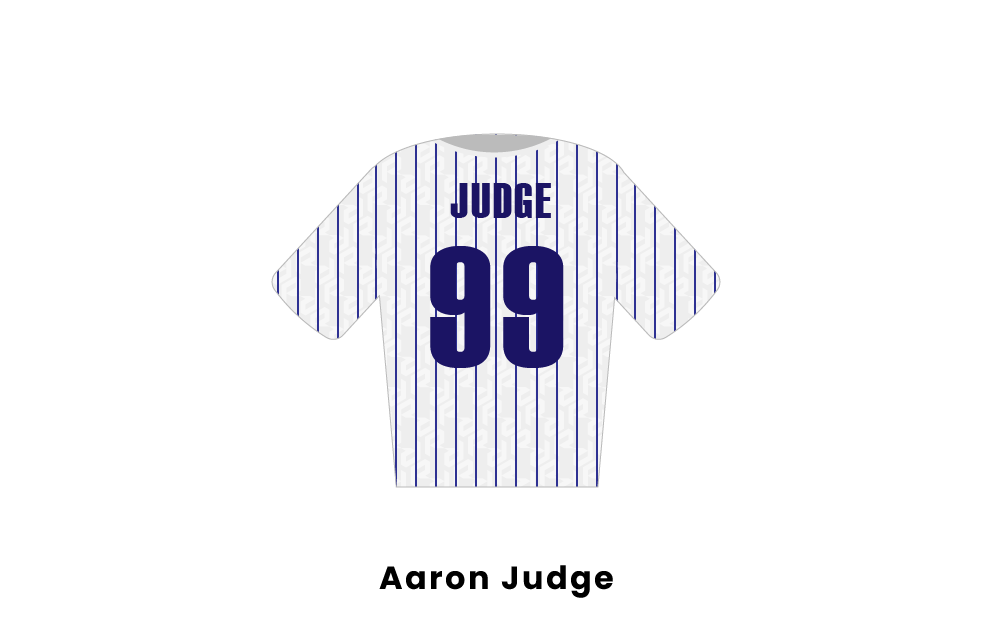 Aaron Judge is a professional baseball player that plays in the MLB for the New York Yankees. Judge wears the number 99 jersey and plays in the outfield. Aaron Judge began his professional career in 2013 with the New York Yankees and has stayed with the team ever since. Judge grew up in California and was adopted by Patty and Wayne Judge when he was a baby. In his teenage years, he excelled at football and basketball, even though baseball was his favorite sport. Judge went on to play college baseball at Fresno State University. The talented batter and outfielder is perhaps most known for his achievement in the 2022 MLB season, breaking the all-time home runs record in a single season without the use of performance-enhancing drugs, hitting 62 home runs.

While Aaron Judge’s net worth is not officially known due to his lucrative brand sponsorships, his net worth strictly from baseball contracts is an estimated $19 million dollars. Judge built his net worth primarily through playing baseball. Initially, Aaron Judge signed his first professional contract with the New York Yankees in 2013 for a whopping $1.8 million. Judge has stayed with the New York Yankees and most recently signed a contract for the 2022 MLB season for $19 million. The baseball star also has lucrative brand partnerships with Pepsi and Adidas.

While Aaron Judge is a talented outfield player, he has primarily made a name for himself and built his star status around his hitting and home run abilities. On October 4, 2022, Aaron Judge hit his 62nd home run in the 2022 MLB season, making him the all-time highest home run hitter in a single professional baseball season. While Barry Bonds previously held the record with 73 home runs hit in the 2001 MLB season, many do not count Bonds’ record due to his abuse of performance-enhancing drugs at the time.

Due to his incredible talent, Aaron Judge has been presented with many baseball awards and honors throughout his professional career playing for the New York Yankees in the MLB. The outfielder earned his first professional award in 2017, the Esurance MLB Award, for being the best rookie in the league. In the 2017 season, Aaron Judge went on to win 12 more awards from various baseball organizations and brands, praising the California native for his skill and abilities, such as being selected Rookie of the Year by Sporting News, Baseball America, and the BBWAA.

Aaron Judge is known to be a very private and guarded celebrity in regard to his personal life. When Judge was less than a month old, he was adopted by Patty and Wayne Judge and moved to Linden, California. Growing up, Aaron Judge was a talented athlete all around, showing promise in football. However, Judge’s love for baseball soon took over as he excelled in high school.

Judge went on to play baseball at Fresno State University in California, where he met Samantha Bracksieck. Bracksieck and Judge dated throughout college and his minor league season but eventually broke up. The couple rekindled their relationship in recent years, until they eventually got married in December of 2021.

Aaron Judge enjoys watching NFL football and spending time with his friends and family in his free time. It is also known that he is an avid dog lover and enjoys meeting his young fans and inspiring young baseball players.

Who is Aaron Judge?

Aaron Judge is a professional baseball player in the MLB that was born in 1992. Judge began his professional career playing for the New York Yankees in 2013 and has stayed with the team ever since. The California native is renowned for his fielding and hitting abilities and has won many MLB Player of the Week and Player of the Month Awards. In his 2022 season, Aaron Judge beat the records for most home runs hit in a single season without performance-enhancing drugs when he hit his 62nd home run in the season.

What is Aaron Judge most known for?

Aaron Judge is a professional baseball player in the MLB that is most known for his ability to hit home runs. The outfielder has played with the New York Yankees since 2016 and has garnered widespread fame due to his performance in the 2022 MLB season. Judge broke the record for most home runs hit in a single season without the use of performance-enhancing drugs when he hit his 62nd home run in October 2022.