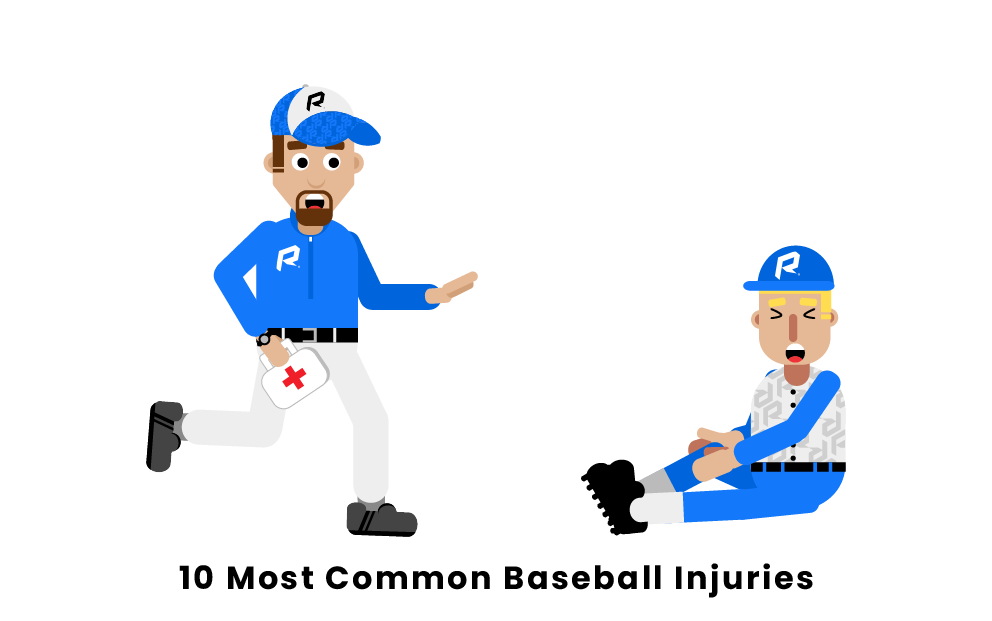 Unfortunately, baseball is a sport that features its fair share of injuries, especially at the pro level. While casual fans might be surprised to hear how often baseball players get injured, this makes sense given that the MLB season features competition nearly every day, with 162 games in the regular season. Read on to learn about the most common injuries in baseball.

What Are the Most Common Injuries in Baseball?

​The obliques are muscles in the core that play a crucial role in rotation, so it should come as no surprise that this is a common injury amongst baseball players. Due to the rotation of a player’s torso necessary to hit or throw a ball, this type of injury is common amongst both pitchers and hitters. Minor oblique strains can clear up inside of a week, while more severe ones can take months to recover from.

Most commonly, baseball players get tendonitis around the area of the elbow or rotator cuff. This injury arises due to players constantly throwing the ball, day-in and day-out. When the throwing muscles in the wrist, hand, and shoulder are constantly under stress, they can become inflamed. This inflammation causes stiffness as well as pain around the joints like the elbow. Pitchers are especially susceptible to tendonitis, as their arms make the most stressful throws in the game. Tendonitis generally will go away with rest, stretching, and muscle work. However, it is a nagging injury which will not go away if the muscles are not properly rested. Baseball teams usually shut down a pitcher’s arm, then after a week or longer will begin to stretch it, until finally allowing the pitcher to pitch in simulated games.

Pitchers are almost always the victims of torn labrums. The labrum is a ring of cartilage in the shoulder that can be damaged during the extremes of the throwing motion. Since pitchers repeat this motion over and over throughout the game, they are likely to tear the labrum. Many times surgery is necessary and recovery time is lengthy. Additionally, it is hard for pitchers to regain their form after the injury and it may take a long time to get back to their pre-injury self. After the surgery, the path back to full recovery is full of slow reestablishment of strength and form.

The UCL (unilateral collateral ligament) is a ligament on the inside of the elbow. When it is severely damaged it requires the famous “Tommy John Surgery” to reconstruct the arm. It was first done on baseball pitcher Tommy John in 1974, and since then has become one of the most common surgeries in baseball. Famous MLB stars who have recovered from the surgery include Stephen Strausburg, Jacob deGrom, and Adam Wainwright. Each of these three were pitchers and, once again, this injury is prevalent in pitchers, but many position players also need Tommy John Surgery. After the surgery, baseball players need to take about a year off in order to learn to throw and strengthen both their elbow and shoulder.

“Dead Arm” is essentially an extremely fatigued arm that has been overthrown. This arises in all players, but most commonly in pitchers. It generally occurs when people have taken time off (such as during the offseason) and have begun to get back into a full throwing schedule. It also occurs in young players or people who continually make throws beyond their arm’s capabilities. All this injury needs is rest for a full recovery.

In baseball, ankle sprains are commonly sustained on the basepaths. They can occur when a base runner hits the bag awkwardly while either running or sliding. While the major leagues have well groomed fields, at lower levels, such as high school or little league, players can also sustain an ankle sprain while fielding on uneven surfaces. In most sports, this is probably the most common injury, but in baseball it does not occur as often. Depending on the severity, this injury can take anywhere between a week and a month to heal.

As stated above, rotator cuffs can be a source of tendonitis in baseball, but there are also other injuries that can affect them. After an extensive period of tendonitis, rotator cuffs can wear down and become susceptible to tears. These tears can require surgery to repair, but if they are not severe, physical therapy may be able to treat them.

The wrists are a common point of injury in baseball. One common way this occurs is during a batter’s swing. With bats that weigh around two pounds, many times the wrist or hand can be hurt if the batter uses improper form. Likewise, the same can be said for throwing a baseball. Players’ wrists are also hurt when players are hit with the ball. Players can also jam or sprain their wrists by sliding head first into bases too late. This causes their hand to smack into the end of the base, and can lead to a broken or sprained wrist. Broken wrists can prove catastrophic to a player’s season, especially if they’re a hitter. However, sprains are a bit more manageable.

Torn ACLs are a dreaded injury throughout all major sports, and baseball is no exception. The most common way baseball player’s tear their ACL is running the bases, however pitcher’s have also been known to tear their ACL due to a misstep while delivering a pitch due to the strain it can place on their landing leg’s knee. These injuries usually require surgery and a lengthy rehab process.

One injury that is uncommon but highly dangerous is a baseball head injury. With a baseball that can be thrown around 100 miles per hour by elite pitchers, or hit in the hundreds of miles per hour by a hitter, a ball that hits a player in the head can be disastrous. For example, in 2014, MLB All-Star Giancarlo Stanton got hit in the face by an 88 mile-per-hour pitch and suffered a facial fracture. Other players, such as Aaron Rowand in 2010, have been hit by pitches and suffered concussions. Some players now put facial covers on their helmets to protect them from suffering a head injury. Outfielders have also been known to sustain concussions by running into outfield walls while chasing fly balls, with some players like Jacoby Elsbury dealing with long term effects of such an injury.

These injuries are not as common or severe as the 10 injuries listed above, but they are still a frequent occurrence in baseball, and thus deserve a brief note:

The meniscus is a piece of cartilage in the knee, and is most susceptible to injury while batting or running the bases in baseball. Due to the power that is used in the explosion of batter’s and pitcher’s front knees, the meniscus often tears in baseball. This tear makes it extremely difficult and painful to pivot. While tears can be played through, players may be less effective and will eventually need to get surgery on their knee.

A bone bruise is an injury to a bone which is less severe than a fracture. It often occurs in baseball when a player is hit with the ball. This can occur when a player is batting or when a pitcher or fielder gets hit by the ball. Generally, a bone bruise can heal within a few weeks, but it could also last up to six months. These injuries are moderate, and are typically good news to players who fear a fracture.

The Achilles tendon connects the calf and the heel, and is one of the many tendons which can become commonly injured in all sports, not just baseball. The most common causes of Achilles Tendonitis in baseball are tight calf muscles, overuse, and straining from improper running or sliding to a stop.

Hamstring injuries occur in the tendons and large muscles at the back of the thigh. They commonly occur due to explosive movements, such as running bases, leaping to make catches, and landings or slides. Hamstring injuries can heal quickly with rest, icing, and elevation, but once a hamstring has been injured once, it becomes easier to injure it again.

Why do baseball players get injured so easily?

While there are a range of different factors that contribute to baseball players getting injured so often, the most relevant is the grueling schedule, with games played daily. The MLB regular season features 162 games, a massive schedule that leads to more than a few bumps and bruises for anyone starting in a majority of it.

What changes have been made in Major League Baseball to avoid injuries?

How can you prevent baseball injuries?

There are a number of practices that baseball players can adopt in order to reduce the chance of sustaining an injury, though there are a number of philosophies and disagreements about which practices are best. However, most experts agree that there are certain habits which a generally good for baseball players to practice in order to avoid injury, including: warming up properly before playing, taking part in offseason and in-season programs to improve strength and endurance, and avoiding constant baseball playing in the offseason in order to rest the body, along with playing other sports to hone different muscle groups.