Where Is Badminton Most Popular? 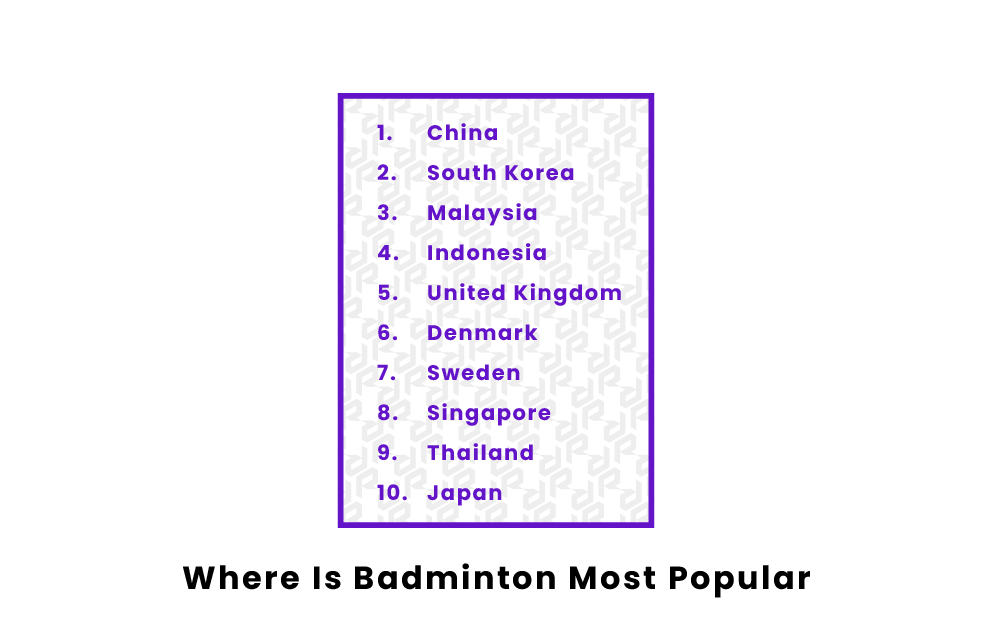 Badminton is a sport many people in the United States play for fun, whether it be at family gatherings in the summer or in gym class during the school year. Around the world, however, badminton is quite popular. In fact, by some measures, it is the second most popular sport in the world, just behind soccer. Below, ten countries where badminton is popular are ranked and discussed.

What Countries is Badminton Most Popular In?

The ten countries below are listed in order of badminton’s popularity within them.

The country where badminton is most popular is China. People across the country of all ages enjoy the game, from kids in elementary school, to adults playing professionally, and everyone in between. Speaking of professional badminton, China has had great success on the international badminton stage. In fact, since Badminton was first introduced to the Olympics, China has won 41 total medals in the sport between the five badminton events. The five Olympic events are men’s singles, men’s doubles, women’s singles, women’s doubles, and mixed doubles. The 41 medals that they have won are the most out of any nation, 18 of which are gold, eight silver, and 15 bronze. This success has contributed to the popularity of the sport throughout China. Moreover, perhaps the most successful badminton player of all time, Lin Dan, is from China. When he was 28 years old, Dan completed what is known as the Super Grand Slam in Badminton. In other words, he won all nine major badminton tournaments that an individual could win, most notably the Olympics, World Championships, and the World Cup.

Another contributing factor to the sport’s popularity is how easily accessible it is. There is very little equipment required, all that is needed is a racket, a shuttlecock, and a net. Thus, people of all economic backgrounds can play the game easily enough. In terms of sports overall in China, badminton ranks as the third most popular sport, behind only table tennis and basketball.

The next sport on the badminton popularity list is South Korea. Like China, badminton is popular with people of all ages and demographics throughout the country due to its easy-to-play nature and accessibility. While not quite as much as China, South Korea has still had great success on the international badminton stage over the years. Some of the top players in the world, including Son Wan Ho and Lee Yong Dae, have come out of South Korea, and Shonh Seung Mo won the country's first Olympic medal in the sport. Overall, while not experiencing the same amount of success as China, South Korea has managed to win 19 Olympic medals in Badminton between the five aforementioned events that there are.

This success has been particularly attractive to young citizens in South Korea, as those aged 13-18 play the sport at the highest rate, according to recent studies. 27 percent of South Koreans who said they play badminton regularly were in this age range, followed by 14 percent in the 19-29 range and 13 percent in the 30-39 range.

As can be seen on the list above, the countries that round out the top ten are Malaysia, Indonesia, the United Kingdom, Denmark, Sweden, Singapore, Thailand, and Japan. Clearly, badminton is quite popular in Asian countries, as seven of the top ten nations where it is popular are in Asia. That being said, there is still some European interest in badminton, with the fifth, sixth, and seventh-ranked nations being on the European continent. Perhaps a factor that has fueled this popularity is Viktor Axelsen, a Danish badminton player who is currently the number one ranked male individual in the world. In total, six of the top ten male players in the world reside in one of the top ten nations on this list, further proving that international success is a key contributor to badminton’s popularity amongst the nations.

On the women’s side, Chen Yu Fei of China is the number one ranked player, so the best player resides in the nation where it is most popular. Overall, eight of the top 10 women reside in the 10 countries listed above, again proving that success can be a cause of popularity.

Some of the same factors that were mentioned above for China and South Korea are true for nations around the world. The simple skills required to play badminton and the lack of equipment needed both allow badminton to be played by individuals and pairs across the globe. Overall, while simplistic in nature, badminton has millions of fans around the world, and its popularity is only growing in many places.

Pages Related to Where Is Badminton Most Popular?