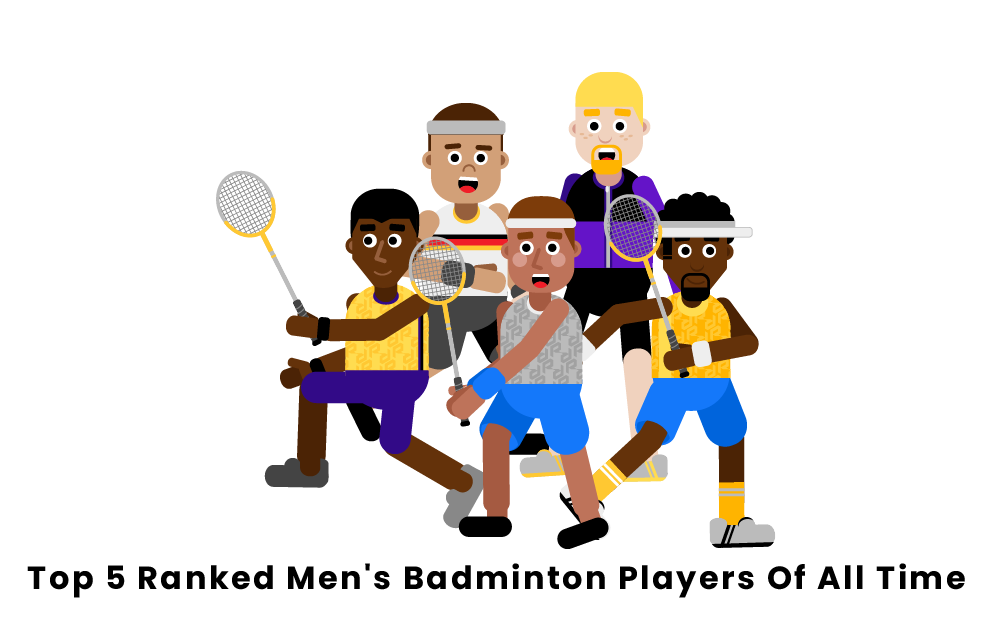 Listed below are the top five men’s badminton players of all time, ranked in order from one through five. Rankings are based on several different factors, including career win-loss records, the number of championships won, appearances at Olympic events, and on-court skills. The country from which each player hails is also listed.

Who are the Best Men’s Badminton Players of All Time?

Nicknamed “Super Dan” within the badminton community, Lin Dan is not only the best badminton player to ever hail from China, but he’s also the greatest player of all time in the eyes of most fans. Known for being a risk-taker, Lin consistently attempted difficult shots that rendered opposing players helpless, seemingly pinpointing the edge of the sidelines without landing the shuttlecock out of bounds every time.

Lee Chong Wei grew up playing basketball until his mother deemed it unsafe and forbade him from playing the sport again. This fact makes it all the more impressive that Lee was able to make a seamless transition to badminton and cement himself as the second-greatest player to ever live. He is undoubtedly the best badminton athlete from Malaysia, breaking many of the sport’s long-standing records before his retirement in 2019.

In addition to being third on the all-time list, Taufik Hidayat is arguably the best badminton player out of the several dominant players that hail from Indonesia. He played in the same era as Lin Dan, competing against him many times in World Championship matches that represented the most highly contested rivalry the sport had ever seen.

Rudy Hartono is another famous Indonesian badminton player, with his legendary career trailing only that of Taufik Hiyadat in the scope of the Indonesian badminton scene. Despite his playing career taking place several decades ago, in the 1960s and 1970s, he has still been viewed as one of the greatest athletes of all time, thanks in part to his tremendous speed, which allowed him to track down shots that appeared entirely out of reach.

For years, it seemed all Morten Frost knew how to do was win major championships. His tendency to excel under the spotlight earned him the nickname “Mr. Badminton” from the media. Nonetheless, he is often labeled the world’s greatest badminton player that was never a world champion because he failed to emerge victorious at any of the World Badminton Championships. Had Frost been able to add that to his already impressive resume of tournament victories, he would likely be in the top three of these all-time player rankings.

Born in Denmark, Peter Gade is a world-renowned, retired men’s badminton player. Before his retirement in 2012, Gade recorded an impressive record of 517 wins and 155 losses. His success in the European Championships was unmatched, winning a total of five gold medals in men’s singles, five gold medals in mixed team, and three gold medals in men’s team. Gade was known for his creative playstyle, fast attacks, and deceptive shots that always kept opponents on edge. He represented Denmark in the Olympics Games four consecutive times in 2000, 2004, 2008, and 2012, although he never brought home a medal.

Viktor Axelsen is an up-and-coming men’s badminton player hailing from Denmark. Axelsen is a right-handed player who specializes in the men’s singles discipline of badminton and has put Denmark on the map in the realm of badminton competition. In fact, Axelsen’s gold medal finish in the 2020 Tokyo Olympics was just the second time in Olympic history that Denmark has earned a gold medal in Badminton. This feat had previously not been accomplished since Poul-Erik Høyer Larsen secured the gold medal for men’s singles in the 1996 Olympics. Viktor Axelsen appears to be en route to a sterling badminton career and will surely put the rest of the world on notice in future Olympic competition.

Who are the best badminton players of all time?

The best badminton players of all time are Lin Dan and Gao Ling. Lin Dan has dominated on the world stage and is widely considered to be one of the best of all time. By the time he was 28, he had won all nine major badminton tournaments in the world. Lin Dan also has won two Olympic gold medals. Gao Ling is also a great badminton player from China and is regarded as one of the best female players to ever play the sport. She won a record four Olympic medals in doubles, two of which were gold.

Who holds the record for the most men’s World Badminton Championship titles?

The record for the most men’s World Badminton Championship titles is shared by Chinese player Lin Dan and South Korean player Park Joo Bong, each with five total victories. Lin Dan’s career featured an unparalleled level of dominance in the men’s singles category, with all five of his titles coming within this category. Meanwhile, Park Joo Bong earned titles in two different categories: men’s doubles and mixed doubles. Park’s title count at the time of his retirement consisted of two titles in the men’s doubles event and three titles in the mixed doubles event.

What men’s badminton player holds the record for the most Olympic Medals?

What men’s badminton players won gold medals in the 2020 Olympics?

The Olympic gold medal winners in the 2020 Tokyo Olympics were Wang Yi Lyu (China), Lee Yang (Chinese Taipei), Wang Chi-Lin (Chinese Taipei), and Viktor Axelsen (Denmark). Wang Yi Lyu earned Olympic gold for China in mixed doubles, Lee Yang and Wang Chi-Lin were the gold medalist doubles team in representation of Chinese Taipei, and Viktor Axelsen took the title in men’s singles for Denmark. Each of these players demonstrated dominance within the sport, and, in the case of Viktor Axelsen, we may be witnessing the rise of a new force in the sport of badminton.