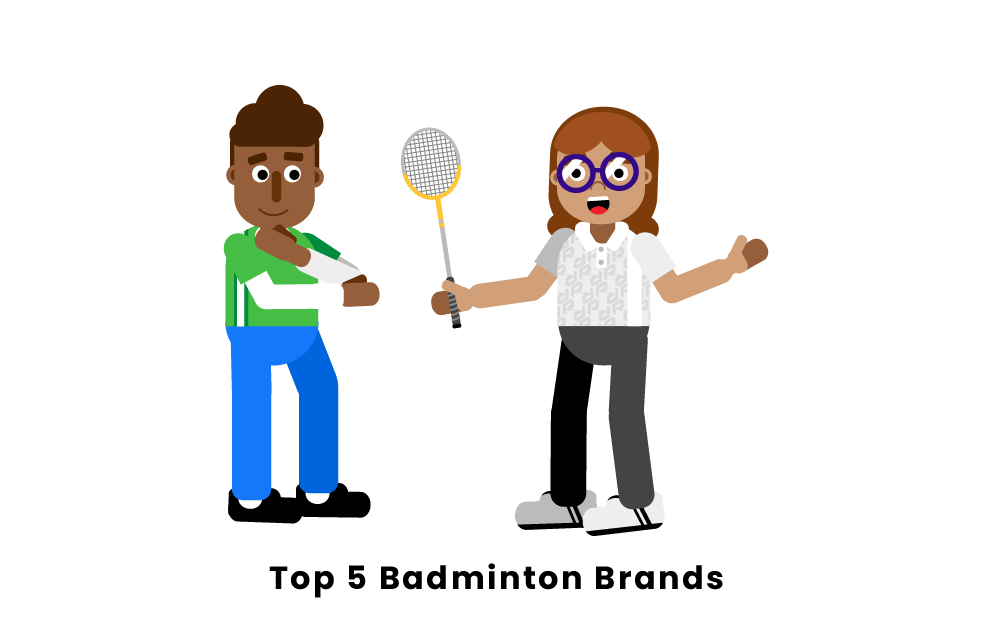 In the world of badminton, there are several manufacturers that outfit players and coaches alike. These brands are internationally recognized, as people from all over the world buy their products. Read on to learn more about the most popular badminton brands worldwide.

What are the most popular badminton brands?

Yonex is a phenomenal badminton equipment manufacturer that has been bringing high-quality original products to its customers since 1946. This famous international brand based in Japan has an 81% preference rate for use by global professional badminton players in competition. All of the badminton rackets produced by Yonex are guaranteed to cultivate strength, speed, and control. They make products that can be used by everyone, from beginners to the best in the world. Some of the most desirable and popular rackets that they make include the Yonex Duora 10, Yonex Voltric 7 G4, and Yonex ASTROX 88 S/D.

Li-Ning is an internationally recognized brand that is located in Beijing, China. Not only do they produce top badminton equipment for athletes around the world, but they are also the leading manufacturer of sporting goods in China. From beginners to professionals, this brand can provide the perfect rackets, shoes, bags, and clothes for play. Some of the best-selling products for the company include the Li-Ning Woods 80, Li Ning Flame N50 II, Li-Ning HC 100A, and Li-Ning UC 3500. This brand is a top choice for many sports players and has been a reliable source of equipment for many athletes in the United States.

Carlton is a top producer of badminton equipment that has been around since the 1940s. This brand, based in the United Kingdom, is best known for its superior badminton rackets. In 2009, the Carlton Badminton System was introduced, which essentially provided scientific proof that their design improved a player’s game more so than ordinary rackets. The rackets are desirable because of their high-quality, durability, and reliability during play. Some of the best rackets that they produce are the Carlton Razor, Isoblade, Ignite, and Vapor Trail. Top badminton players around the world, including Gail Emms and Nathan Robertson, swear by this equipment.

Victor is a badminton brand that originated in Taiwan in 1968, but has since become a worldwide phenomenon, gaining popularity across the globe. Both individual professional athletes, like Gao Ning, Yang Wei, and Zhang Ji Wen, and professional teams, such as the Korean and Philippine national teams, are fully committed to the Victor brand. Top selling points for the brand are their racquets’ ability to provide maximum strength when spiking and lightweight structure so that a player can quickly make counterattacks on their opponent. Two of their most popular rackets are the Victor Brave Sword 12 and the Meteor X90, both of which are light, durable, and extremely accurate.

Felet is a major producer of badminton equipment in Southeast Asia but has since expanded into more global territories. The brand, once known as Fleet, is a top contender in the badminton industry and has been quite innovative since its founding 30 years ago. They were the first company to produce an 88 single-pass grommet hole light carbon racket, a major breakthrough for this piece of equipment. Durability, consistency, and power are guaranteed with this brand. Some of the best rackets that are recommended from this brand are the Legend Zakry and the TJ-Tech Raytheon.

Chicago-based Wilson has been owned by Amer Sports of Finland since 1989. The global brand makes equipment for all kinds of ball and racket sports, including squash, tennis, pickleball, football, and golf. Wilson is a great choice for high-quality badminton gear at an affordable price. An outstanding example is their Matchpoint Pro racket, available for around $20. In addition to various packages of shuttlecocks, Wilson makes several high-end rackets under their Blaze and Fierce lines, which retail for over $100.

Although they also make rackets, Ashaway is known for being the premier manufacturer of badminton racket strings in the world, with the top professional players using their strings. Based in Rhode Island, Ashaway was founded in 1824 as a fishing line company. Following the invention of nylon lines, they started making racket strings in 1949. Today, their ZyMax 62 strings are the thinnest badminton racket strings available. Ashaway sells prepackaged strings, but they will make custom strings upon request. They also sell shuttlecocks, beginner rackets, and two lines of premium badminton rackets called NanoQube and Phantom.

What is the best badminton brand?

One of the top badminton brands in the world is Yonex. Their rackets are preferred by the majority of professional badminton players and are known for their quality and precision. Yonex offers a complete range of badminton gear, as well as equipment for tennis, golf, and running. Other excellent badminton brands include Li-Ning, Carlton, Victor, Felet, Wilson, and Ashaway.

What badminton brands sponsor the BWF?

Three badminton brands sponsor the Badminton World Federation: Yonex, Victor, and Li-Ning. All three are primary sponsors of the BWF, the worldwide governing body of badminton. The BWF sanctions the biggest badminton tournaments, including the BWF World Championships, the Thomas Cup, and the Uber Cup. Yonex and Victor are also the BWF’s preferred suppliers of flooring and shuttlecocks.