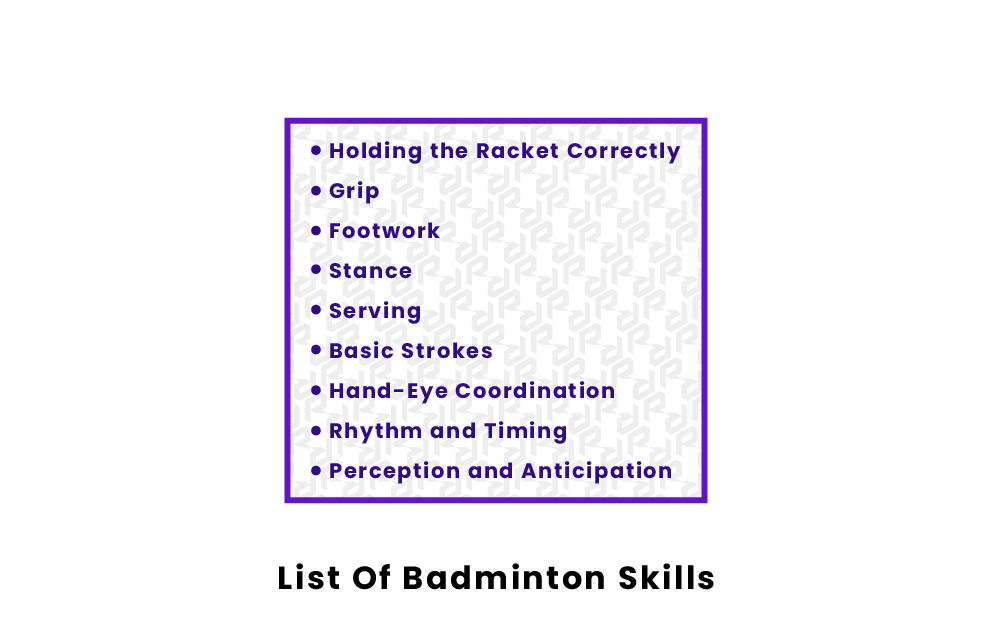 Badminton is a friendly and relatively easy sport to learn for anyone looking to pick up the racket and get involved in the fun. Basic skills such as grip, footwork, and stance can be learned quickly but will take some time to master. Meanwhile, more advanced skills such as anticipation, perception, and rhythm develop from years of experience. Whether you’re just looking to have some casual fun with friends or have your eyes set on becoming a competitive badminton player, check out this list of skills before getting started.

This skill seems simple but should not be overlooked. Holding the racket properly is a skill that every badminton player must know. The direction the shuttle is hit depends on how the player is holding their racket. If a player is holding their racket incorrectly, they will be unable to control the direction they send the shuttle. Holding the racket correctly is similar to a firm handshake. The racket should not be held too tightly because that will eliminate all flexibility from the wrist, but it should not be held too loosely either. Good badminton players gently press their thumb against the wider surface of the grip and hold the racket with the rest of their hand.

Knowing both the forehand and backhand grip is an essential skill for badminton players to possess. For the forehand grip, the index finger controls the racket during the stroke. Meanwhile, the thumb controls the racket when using the backhand grip. Players need to master both of these grips because they are building blocks to learning how to perform every shot in badminton.

Knowing how to serve is vital to players for winning the rally and gaining points. Understanding the different types of serves is the best way to prevent opponents from performing an attacking shot. Good serves should put the opponent in a defensive position rather than an offensive position. For instance, the high badminton serve is used to move the opponent back by hitting the shuttle near the court’s rear end. Meanwhile, the low badminton serve can be used to move the opponent forward and force them to get under the shuttle and make a defensive play. A flick serve is used to trick the opponent into thinking a low serve is about to happen, while the serve actually goes high.

Along with knowing the different types of serves, badminton players must be able to perform the four basic strokes. The overhead forehand stroke is the most common, followed by the overhead backhand stroke. The underhand forearm stroke and underarm backhand stroke are used to defend against drop shots from the opponent. Along with these four basic strokes, there are more advanced shots such as drops, smashes, drives, blocks, clears, and lifts.

A badminton player’s success depends on their speed, and speed comes down to footwork. As such, good footwork is a crucial element of badminton and will help players control their side of the court and save time and energy in the process. Knowing how to move around the court efficiently allows players to return every shot from their opponents. There are six basic pieces of footwork that every badminton player should master.

Badminton stance is crucial for players to be able to retrieve incoming shots from their opponent. Three stances are used during certain situations in a badminton game.

The attacking stance is used against smash and lift shots. This stance requires that the player get behind the shuttle, turn their body towards the side court, raise both arms, and transfer their whole weight to their racket leg.

The defensive stance is used to execute high clear shots and high serves. To assume a defensive stance, a player would open their legs wide, bend their knees slightly, be flexible with their upper body, and raise both of their arms to defend against the incoming shot.

The net stance allows players to connect with the shuttle at its highest point when standing at the net. This stance requires players to place their racket foot forward and their non-racket foot backward. The player should hold their racket in front of their body just above waist height.

These skills develop over time, but they are key. The best badminton players in the world cover the court easily and make every shot look effortless. This is because they have honed and perfected their rhythm and timing through years of practice. Acquiring a natural rhythm is key to developing good footwork and playing with consistency. Having good timing enables players to position themselves to hit the shuttle at just the right moment.

Much like rhythm and timing, these skills are developed over time and are possessed by more advanced badminton players. Players with good perception are able to observe where their opponent is in relation to the rest of the court and adjust their playing style accordingly. They can also notice if their opponent is getting tired. As far as anticipation is concerned, this skill enables players to read their opponents’ next move and change their stance in preparation for the next shot. Anticipation is highly valuable because it can allow players to gain the upper hand in a closely contested match.

What are the fundamental skills of badminton?

What basic skills are most important to becoming a successful badminton player?

The basic skills that are most important in becoming a successful badminton player are serving, hand-eye coordination, and footwork. Serving is extremely important to master, as a good service can immediately put your opponent on the defense. Hand-eye coordination is also crucial, as it is required to hit the shuttlecock and win points. Footwork is a very important basic skill so that you can stay in a ready position at all times.

Where can I practice badminton skills?

Badminton skills can be practiced anywhere you have enough space to hit a shuttlecock back and forth. While a net is crucial to practicing in-game situations, you can practice basic skills such as serving, footwork, and different strokes without one. The best places to practice badminton are on indoor courts, but you can certainly practice outside as well.