What is Axe Throwing? 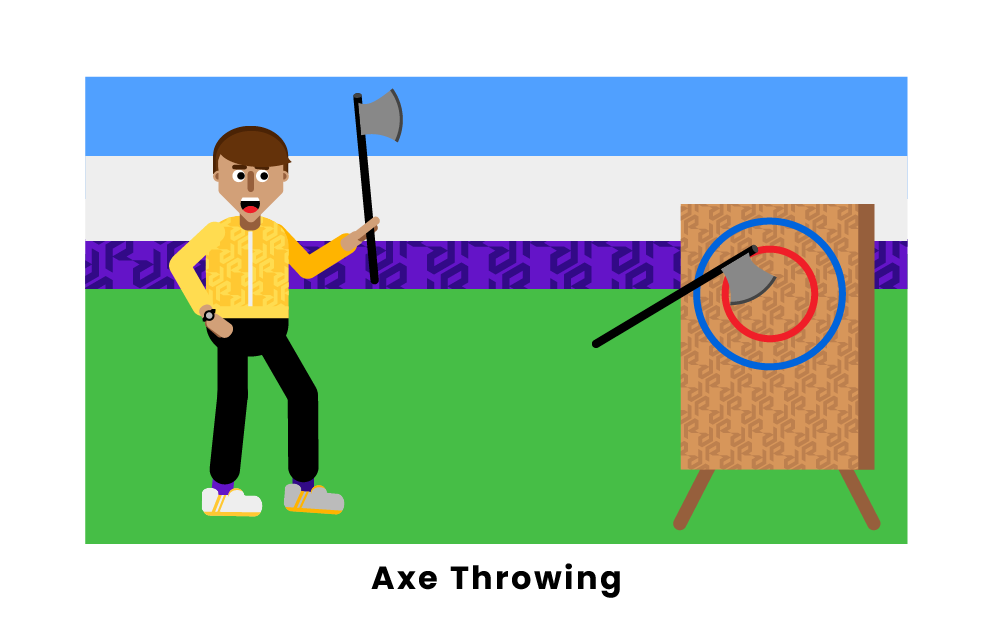 Historically, axe throwing was an event in lumberjack competitions. As of recently, axe throwing has gained serious momentum as a sport around the world. The gameplay is similar to darts, with contestants aiming at the bullseye and throwing an axe at a wooden target. It can be played recreationally at a bar or competitively in a league or competition.

Although loggers and lumberjacks have been practicing their trade since the early 1800’s, the sport of axe throwing grew dramatically in the mid 1900’s as more people grew interested in lumberjack competitions. In 2006, the first axe throwing league was formed in Toronto. A spectator named Matt Wilson is credited for helping the sport grow into what it is today. 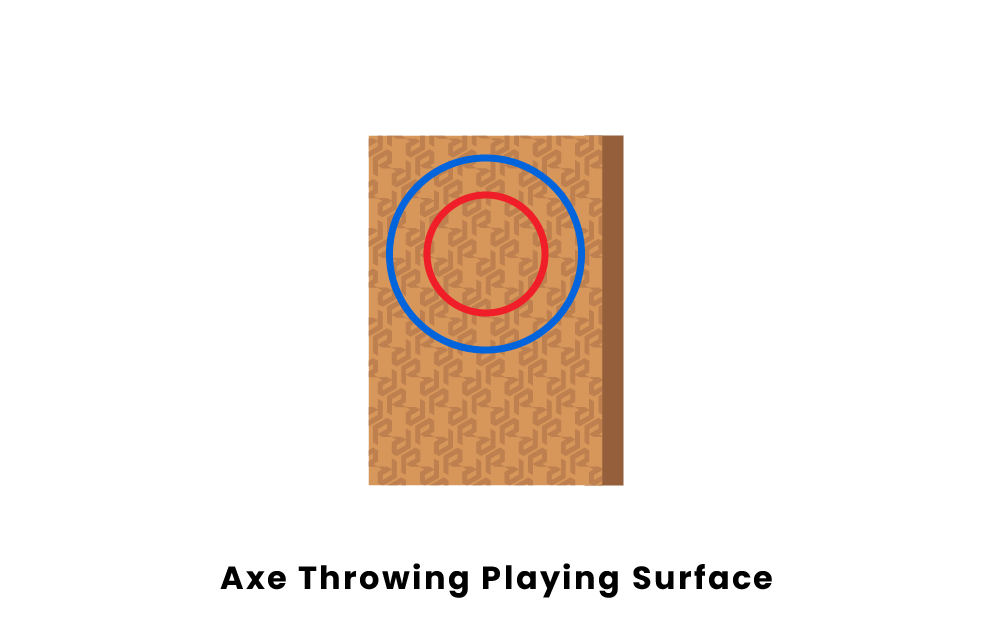 Axe throwing bars and leagues must follow several essential rules and protocols to ensure the safety of everyone involved. The participant must be throwing on a sturdy, slip resistant surface. The “foul line” is where the axe is thrown and is typically 10 to 12 feet away from the wooden target. The material of the wood target varies depending on level of play and location. Common target materials consist of cottonwood, pinewood, palmwood, and spruce. 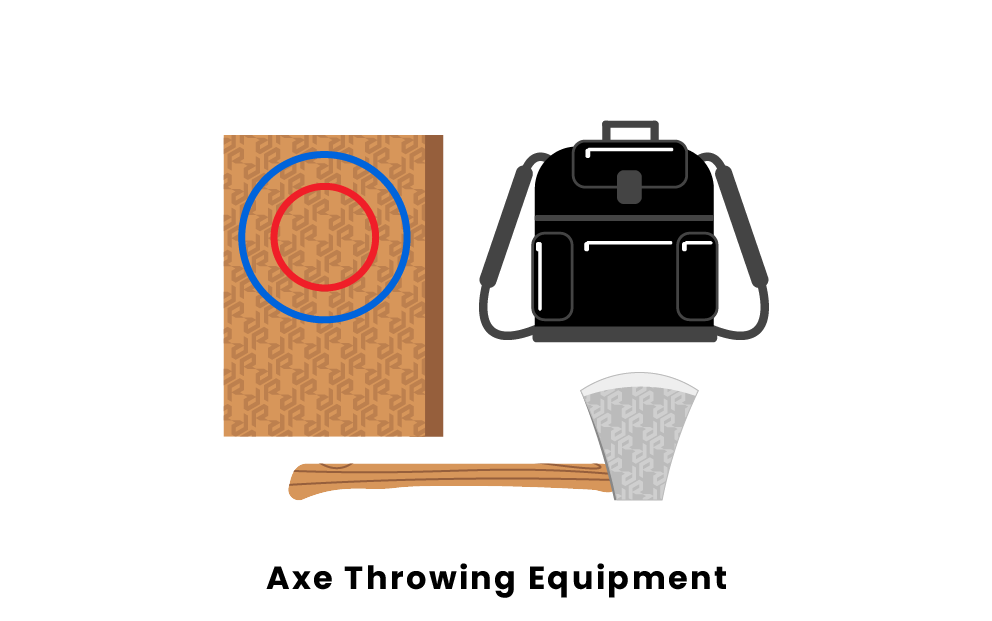 A wide range of axes can be used for throwing, such as tomahawks, hatchets, splitting axes, and double bit axes. Due to how light tomahawks are, they create an unpredictable bounce trajectory once they hit the target. Hatchets, also known as scouts, are the most commonly used axes in recreational axe throwing. Splitting and double bit axes are heavy and typically have a thicker blade. Both are commonly used to chop firewood. There should always be protective net boundaries to ensure maximum safety. Lastly, you need a wood target with a bullseye and multiple outer-laying circles. The farther outside the bullseye circle you hit, the less points your throw is worth.

Here is the essential Axe Throwing equipment you should have: 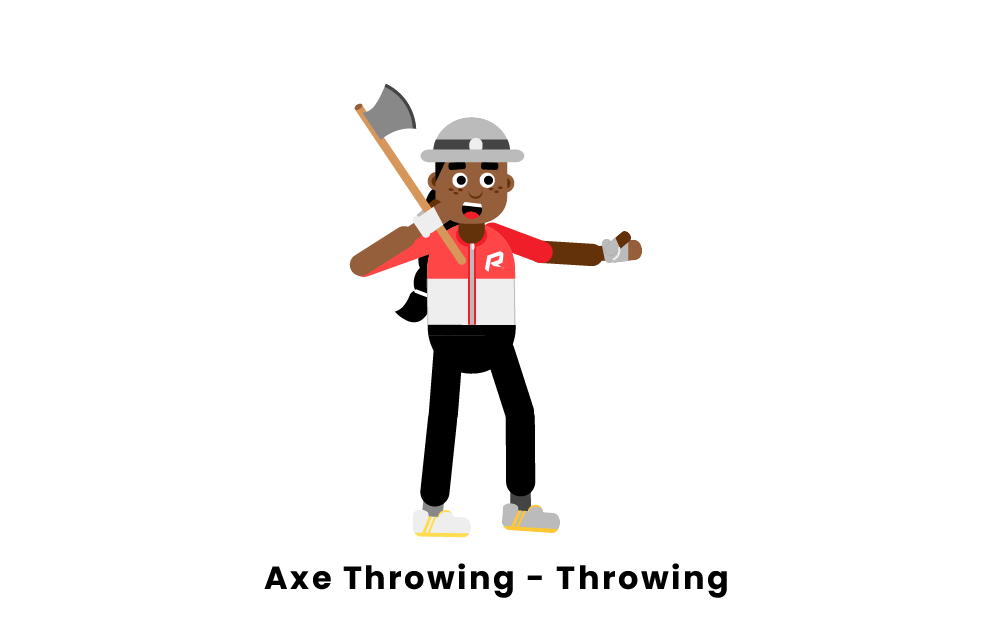 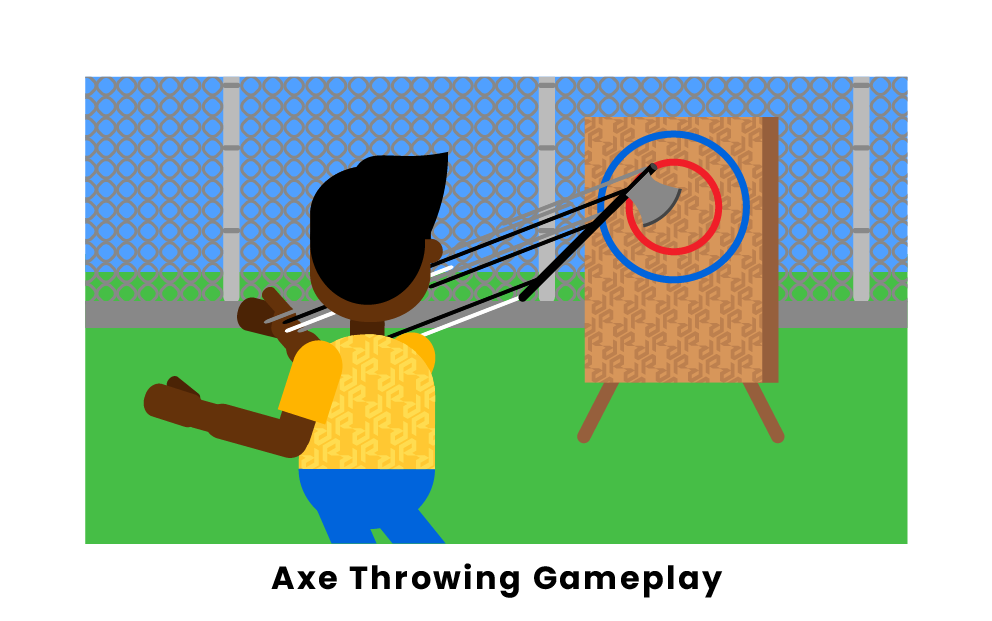 There are multiple games that can be played during competitions, such as standard play, around the world, and horse. Standard play, which is used in the World Axe Throwing League, has a set total of points that must be reached. Around the world involves hitting every point location on the board. Lastly, horse involves the second player hitting the same target that the first player chose to hit. If you can’t mimic the first throwers toss, you gain the letter “H” and go all the way to “E” (The last letter in Horse). 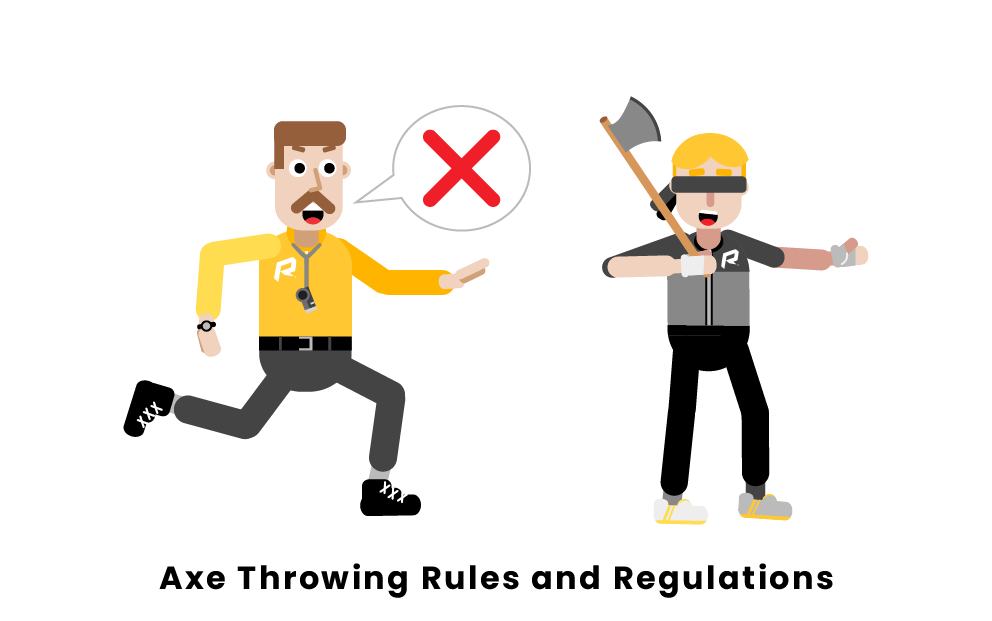 As stated above, each game comes with its own unique set of gameplay rules. One of the golden rules of all axe throwing is to never throw when a participant or judge is in the lane as serious injury may occur. All axes must be inspected by the recreational axe venue or official. As for what qualifies as a point, the axe head, blade and cheek up to the front of the eye allows a point to occur.

Here are the most important Axe Throwing rules you should know:

Like all sports, technique and throwing mechanics matter. It is important to find a spot past the required distance (10 to 12 feet) that you feel comfortable with. It is equally important to find a comfortable and secure position on the axe for your hand. Placing your hand higher up on the axe will cause rotation problems. An important tip that all axe throwers should know is that you want the axe to complete one revolution and hit the board at a 45 degree angle. Lastly, you want to keep your wrist and elbow locked. Axe throwers want to release the axe at the target when the arm is parallel with the floor.

Here are the most important Axe Throwing strategies you should know: 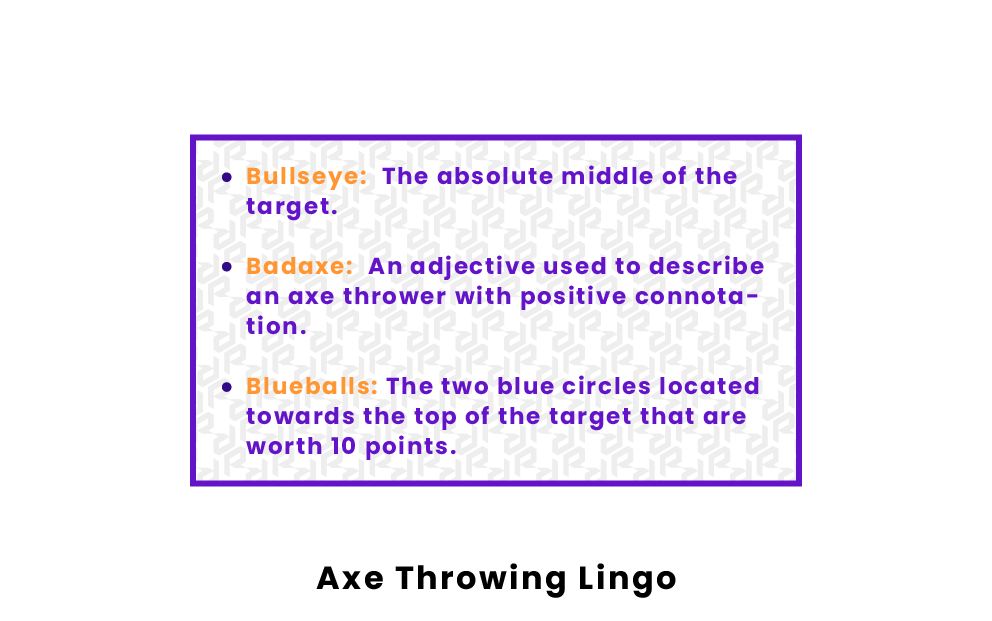 Because axe throwing is similar to darts, you may hear mutual terms. One of the most common phrases in axe throwing is “Bullseye”. Other phrases such as “Badaxe” and “Blueballs” are also commonly heard.

Here is the common lingo and slang in Axe Throwing: 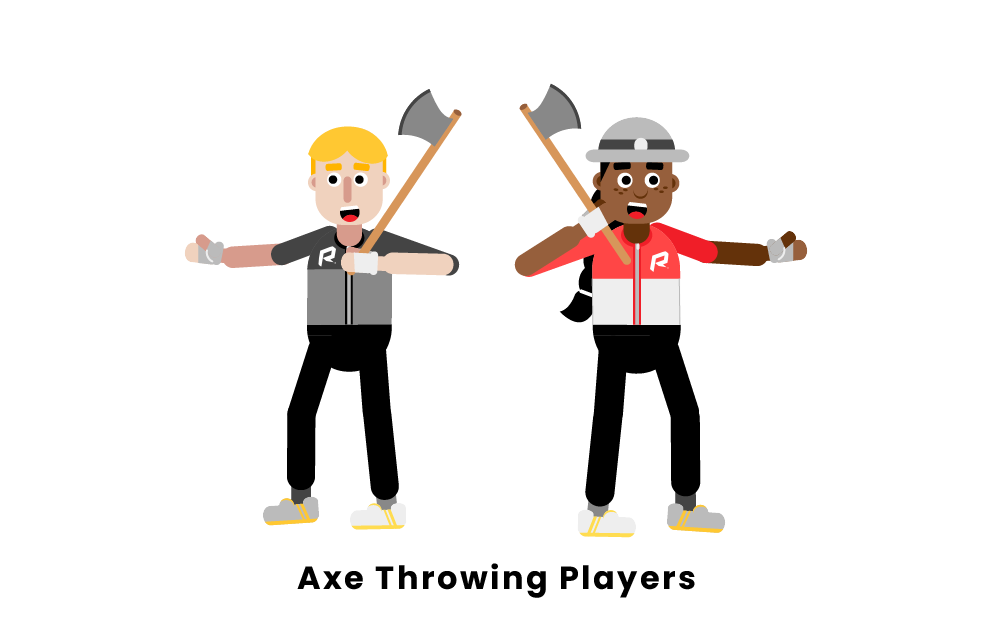 In 2020 amidst the Covid-19 pandemic, the World Axe Throwing League was able to have its championship where winners were crowned. Ryan Smit won the Hatchet division, Zach Crawford won the Big Axe division, and Hayden Brown and Lucas Johnson won the Duals division. With professional axe throwing being a fairly new sport, there aren’t too many established famous players.

Axe throwing is a new recreational phenomenon so there aren’t a large number of professional leagues. However, there are many local and independent leagues throughout the United states and Canada. The biggest league in the world is called The World Axe Throwing League (WATL). The league was created in 2017 by representatives of Canada, the United States, Brazil, and Ireland. The league has 19 axe throwing nations and continues to grow.

Here are the most popular Axe Throwing leagues you should know: 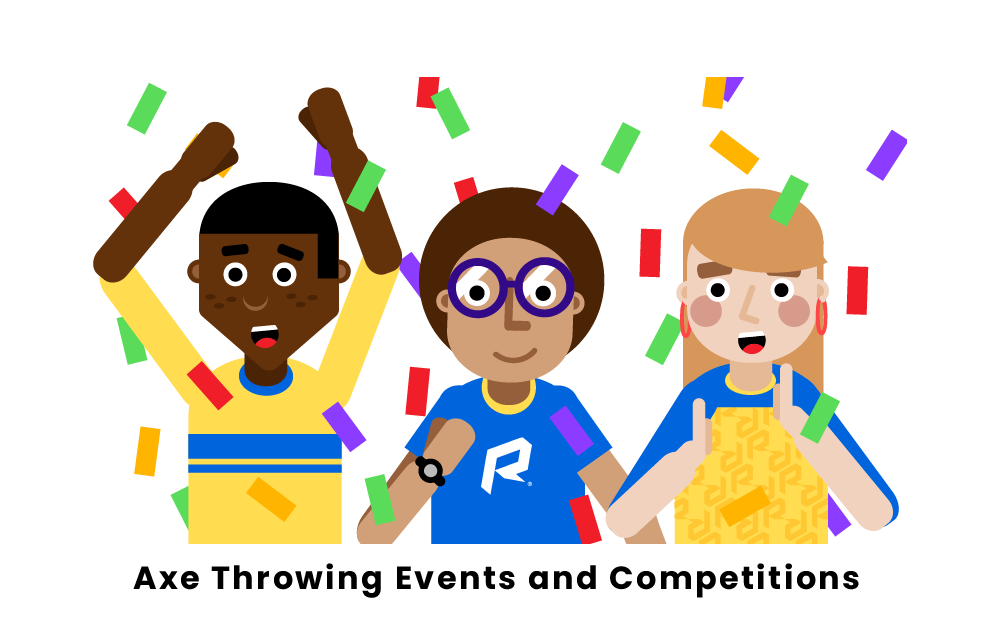 Here are the most popular tournaments in Axe Throwing:

How much does it cost to go axe throwing?

Can you drink alcohol while axe throwing?

Will someone show me how to properly and safely throw an axe?

At every axe throwing venue, there will be an axe instructor to show you everything you need to know about axe throwing.

How long does an axe throwing session go for?

The majority of recreational axe throwing venues will offer anywhere from 1-2 hours for a reservation.

Pages Related to What is Axe Throwing?