What are the rules of australian football? 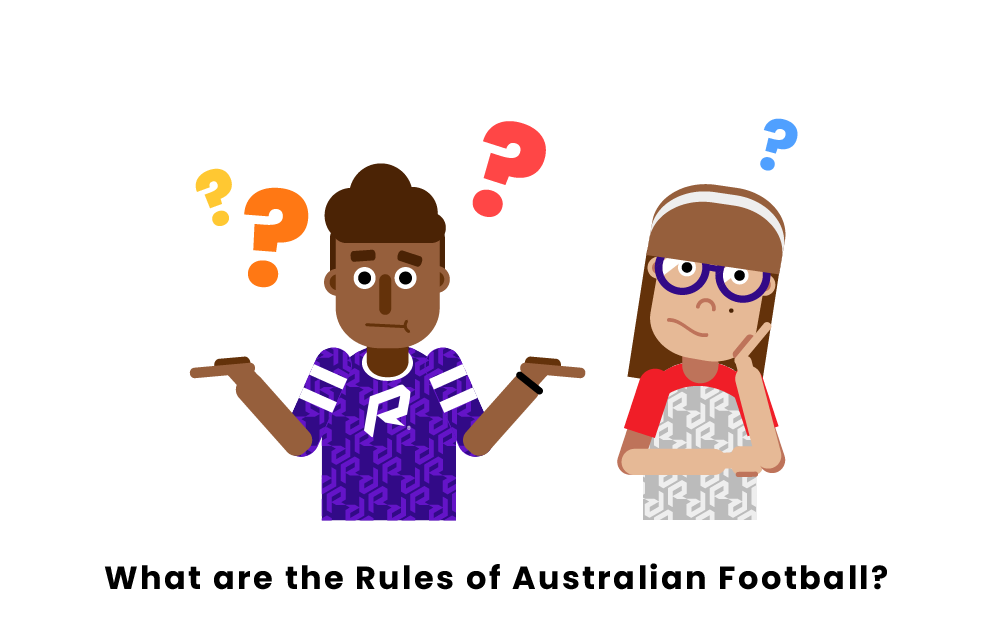 Australian football, or “Aussie Rules,” is a fast paced, contact sport that is similar to football and rugby.

Players aim to kick the ball through four different goal posts to score more points than the opposing team.

The field, also known as the pitch, that Australian football is played on is oval shaped and has a length usually between 135-185 meters and a width between 110-155 meters. Oftentimes, Australian football is played on a cricket field with similar dimensions. At each end of the pitch are four goal posts that are each about six meters tall. Additionally, there is a goal square at the end of each field along with a centre square and centre circle in the middle of the field.

An Australian football game is made up of four quarters that are each 20 minutes long. The game begins with what is known as the ruck. A ruck is similar to a jump ball in basketball where the ball is thrown in the air by the umpire and a player from each team tries to tip the ball to a teammate. Once a team gains possession, they attempt to move the ball down the field at a rapid pace.

Players can move the ball forward by running with it, passing it, or kicking it. Throwing the ball to another player is not allowed. When running with the ball, players must bounce the ball every 15 meters. To pass the ball, players must have the ball in the palm of their hand and then hit it with their other hand in a fist. After catching a pass from a teammate, players continue to move the ball towards the opposing goal. If a player catches the ball off a kick from a teammate, they can ‘mark’ where they caught the ball and can attempt their next move without being tackled.

The goal of the defending team is to stop the opposing team from scoring and to gain possession of the ball. This is done by tackling opposing players, trying to strip the ball, or breaking up passes. When being tackled, offensive players need to get rid of the ball so defenders will often try to restrict their arms so that they can not pass the ball to a teammate. In addition, players must tackle below the shoulders of the ball carrier and should not lead with their heads.

Like American football, players are allowed to block or ‘shepherd’ opposing players to try to clear a path for the ball carrier. The main rule for shepherding is that the player must be within five meters of the ball to be eligible to block. When shepherding, players either try to box out the opposition or bump shoulders and hips to try to clear them out of the way.

To score in Australian football, a player must kick the ball between the goal posts at the opposing end of the field. There are two front goal posts that serve as the main goal area along with two back ‘point’ posts. When the ball gets kicked between the two main posts, a team scores a goal and is awarded six points. However, if the ball passes between a main post and one of the point posts, hits a goal post and passes through, or is deflected and goes through, the team only gets one point. A team can also earn one point if an offensive player brings the ball across the scoring line. After a goal is scored, the ball will be brought back to the center of the field for another ruck.

If one team commits a penalty, the other team can be awarded a free kick, where a player kicks the ball without interference from opposing players. One common way to earn a free kick is off a high tackle, when a player is contacted above the shoulders.

The team with the most points at the end of the fourth quarter wins the game. If the score is tied at the end, the game will go into overtime.

How many umpires are in an Australian football game?

What is holding the ball?

When advancing the ball down the field, players should not hold on to the ball for too long. If a player is tackled and does not get rid of the ball, they will be called for ‘holding the ball’ by the umpire. This results in a free kick awarded to the defending player that made the tackle. Because of this rule, defenders will often try to prevent ball carriers from passing the ball on tackles.

What is holding the man?

Holding the man is when a player without possession of the ball is tackled or held onto by an opposing player. After holding the man is called by the umpire, the player who is tackled is awarded with a free kick. This rule is in place to protect players from unnecessary contact and to focus tackling efforts on the ball carrier. The crowd often tries to persuade the umpire to make a holding the man call by chanting the word “Man.”

How does a player ‘mark’ the ball?

When a player ‘marks’ the ball, they secure the right to make their next move without interference from the other team. To mark the ball, the ball must be kicked from at least 15 meters away and a player must catch the ball without it being tipped by another player and before it hits the ground. After marking the ball, if the player chooses to attempt kicking a goal, they have a maximum of 30 seconds.

Pages Related to What are the rules of australian football?