How Does Scoring Work In Australian Football? 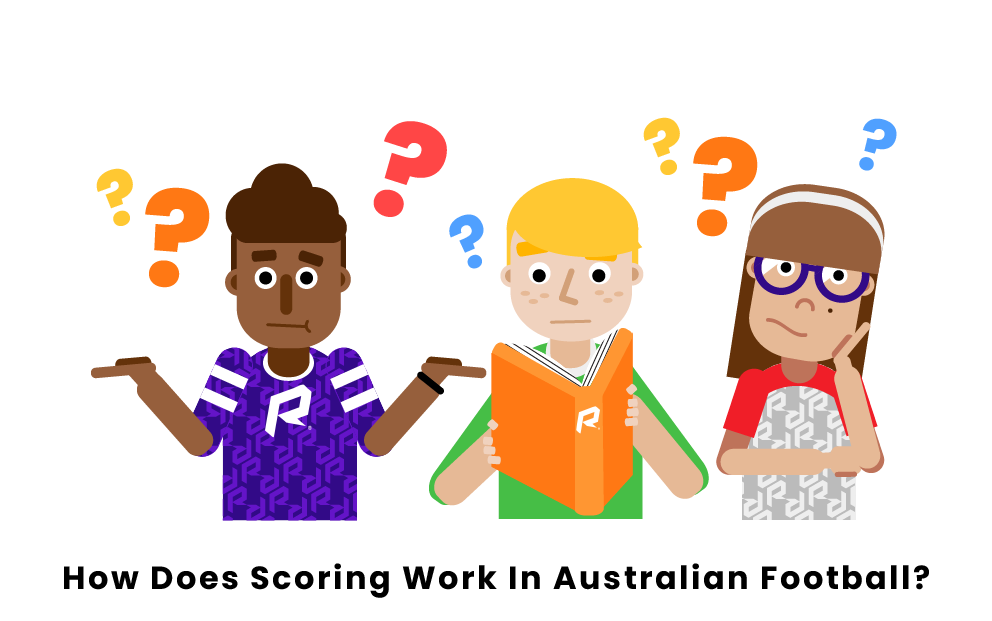 In Australian Rules Football, or footy, you score by kicking a ball through goalposts at the other side of the field. Teams get six points for kicking the ball through the middle two goalposts and you get one point for the outside posts. You pass the ball to your teammates and try to score as many points as you can.

Two teams, on opposite sides of an oval pitch try to move a ball to the other side and score points. At the end of four quarters, twenty minutes each, the team with the most points is declared the winner of the game.

If you couldn't guess from the nickname "footy," in Australian Rules Football you score mostly with your foot. If you kick the ball through the four goalposts you get points. You can score from anywhere on the field but getting closer is obviously better. You can also score simply by running the ball over the opposing team's endline, though this is more rare than simply kicking it. Passing is done with a "hand ball." You put the ball in the palm of your hand and with your other hand you hit the ball with your fist, passing it to a teammate. You can also punt the ball to pass it, mostly for long distances.

If you kick the ball between the middle two goalposts that is worth six points. If you kick the ball between either of the outside goalposts it is worth one point. The same goes for just running the ball across the line. If you do that it is also one point. You get no points for hitting the goalposts, the ball has to fly between the two posts without hitting the posts, or the ground. Obviously you want to aim for the middle as much as possible but you may only hit the sides depending on your position on the field.

The most common way that you score in Australian Rules Football is after you 'mark' the ball. You can 'mark' the ball after three things happen. One, you can mark the ball after a pass has been completed that is longer than ten meters. You can also mark the ball after catching it in the air without anyone else touching it. Lastly you can mark the ball if you catch the ball without it hitting the ground. This is usually a great opportunity to score some points because the opponents cannot tackle you and cannot get too close to you. This means you have a great chance to kick the ball towards the goalposts. That is why you will often see people in Australian Rules Football kicking the ball far to each other and jumping as high as they can to catch it, preferably near the opponent's goalposts.

How do teams score in Australian Rules Football?

In Australian Rules Football, or footy, you score by kicking a ball through goalposts at the other side of the field. Teams get six points for kicking the ball through the middle two goalposts and you get one point for the outside posts. You pass the ball to your teammates and try to score as many points as you can.

What is a normal score for an Australian Rules Football Game?

The scoring in an Australian Rules Football game might look weird. 4.1 to 3.8, 9.9 to 6.1 are all real footy scores. What these numbers mean is that a team scored 4 goals and 1 behind. A goal is a six point score and a behind is one point. If your score is 4.1 then you have 25 points.

What is a mark in Australian football?

A mark in Australian football is similar to a free kick in soccer or a field goal in american football. When a pass longer than ten meters is completed, without the ball hitting another player or the ground, the player who caught the ball gets a mark. This means the opposing team can't tackle them or take the ball, giving them a great opportunity to kick the ball at the goalposts and score. This is why if you watch Australian Rules Football you'll see players kick the ball really far to each other in hopes of marking the ball near the goalposts.

Pages Related To How Does Scoring Work In Australian Football?

Australian FootballWhat are the rules of australian football?
PreviousNext