What are the rules of arena football? 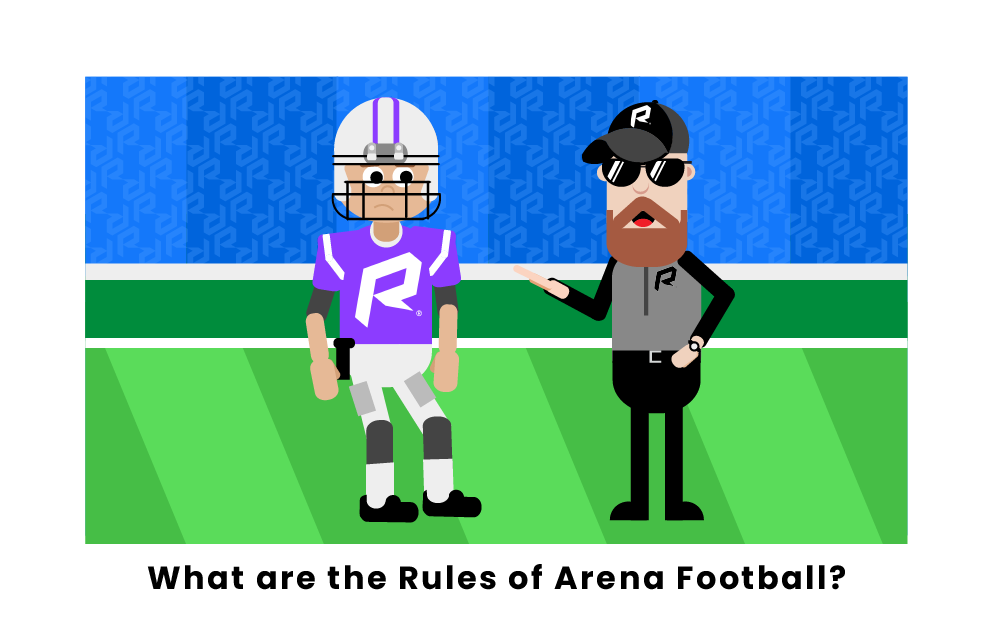 Arena football is much different than the typical gridiron football games you see in the NFL or NCAA. There are a number of major rule differences between the two styles of football, but also a number of similarities. In arena football, the game is adapted to include more action on a smaller playing field. Although the Arena Football League (AFL) filed for bankruptcy in late 2019, there are other smaller leagues such as the IFL and NAL that are still active. Below are some of the rules that make arena football so unique.

The field in arena football is much smaller than in NFL and college football. The field is 85 feet wide by 150 feet long, about half the length of other football fields. This field structure produces more points and scoring opportunities, making the game more exciting. The out-of-bounds area is distinguished by hockey-style walls around the field. Players are called out-of-bounds when they are hit into or over the boards. Since these walls pose a safety risk, there is ample padding around and behind the walls.

While most end zones are the same as NFL and college football end zones, sometimes teams must adapt to the arena in which they play. Since some of these venues are mostly used for hockey and basketball teams, the end zones must be curved to fit on the field. This inconsistency is unusual in a professional sports league but finding venues for the teams is difficult enough.

One of the major departures from mainstream football present in arena football is rebound nets on either side of the field. These nets are 32 feet high and 30 feet wide behind the endzone. These nets are not to keep the ball from going into the stands. The ball is still in play until it touches the ground if it hits the net and stays inbounds, meaning players can recover the ball after missed field goals and extra points. Quarterbacks can also pass the ball off these nets for some highlight-worthy touchdown plays.

Arena football games feature four 15-minute quarters, just like the NFL. This means that there are two 30-minute halves. In each of these halves, both teams get three timeouts. Each half also features a one-minute warning as each half runs down instead of the two-minute warning found in the NFL. In arena football, the play clock spans a total of 25 seconds. Within these 25 seconds, the offense must snap the ball, or else they will be charged with a delay of game penalty.

Unlike many other types of professional football, most players in the Arena Football League play on both offense and defense. Instead of the 53-man roster used in the NFL, arena football uses a much smaller 20-man roster on game days.

All participants play offense and defense, except for a kicker, quarterback, one kick returner, and two defensive specialists. This rule is enforced by the strict substitution rules that only allow for one substitution per player a quarter. This lack of personnel change means that players must be multifaceted, well-conditioned, and have the skills to play on both sides of the ball.

Arena football has fewer options for teams facing fourth down than other leagues. In arena football, teams are not allowed to punt, a common fourth down decision in the NFL. Instead, teams must go for a first down, field goal, or touchdown. This rule eliminates what is usually thought of as one of the most dangerous and boring plays in other types of football.

Along with punting being illegal, more kicking rules differ from mainstream football. Kickoffs are taken from the goal line due to the short field length, instead of the 35-yard line in the NFL. If the ball is kicked out of bounds in arena football, the offensive team either starts at the 20-yard line or where the ball went out of bounds. If the kicking team kicks it through the uprights on the kickoff, the team receives two points, known as a “deuce.”

Other than those differences, most of the scoring rules are the same as in gridiron football; touchdowns are worth six points, an extra point is one point, a post-touchdown running or passing conversion is two points, a safety is two points, and a field goal is three points. Teams do gain another point on field goals and extra points if a drop kick is executed in either situation.

Overtime is conducted in a way similar to the NCAA’s rules. Each team gets one possession on offense from the other team’s 20-yard line, unless they are relocated due to a penalty and must work their way down the field to score from there. If the score is tied after both possessions, a second overtime period takes place, and so on. After the third overtime period, if both teams are tied, they must each attempt a two-point conversion after scoring a touchdown.

What is the Mac in arena football?

What is the Jack in arena football?

The “Jack” is a special linebacker position in arena football that plays next to the Mac linebacker. The Jack has a completely different role than the Mac linebacker. The Jack lines up on the opposite side of the line and cannot blitz the quarterback. Instead, the Jack plays as a coverage linebacker and patrols the lower level of the field. This player cannot go beyond five yards of the line of scrimmage unless they are playing man-to-man on a tight end or fullback in pass coverage.

Is a player out of bounds every time they touch the wall?

While the wall does signal out of bounds in arena football, players can touch it and not be called out. For a play to stop, the player with the ball must be forced into or over the wall. This rule means that players in arena football can use the wall for leverage. The wall adds different strategies and tactics to the game that are not present in outdoor football.

Pages Related to What are the rules of arena football?