How Does Scoring Work In Arena Football? 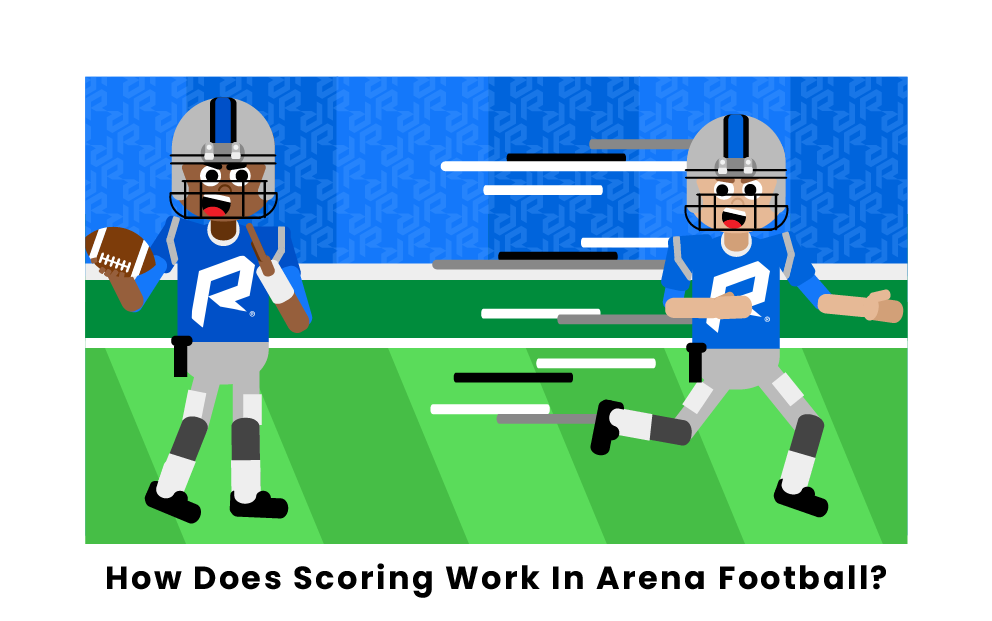 Scoring in arena football is very similar to scoring in the National Football League. The basic methods of scoring include touchdowns, field goals, extra point conversions, and an added option of drop-kicking the football. Teams are given four downs to either advance the ball ten yards for a first down or to score. Unlike traditional football, teams do not have the option to punt the ball on fourth down because of the shortened field, which is only 50 yards long.

Like the NFL, touchdowns in arena football are scored when a ball carrier crosses the opposing team’s goal line or catches the ball inside the end zone. For a touchdown pass to count, the receiver only needs to have one foot inbounds during the catch. Additionally, receivers can score by catching the ball off a rebound from the endzone net before the ball touches the ground. Each touchdown scored is worth six points. After scoring a touchdown, the team has the option to attempt a one or two-point conversion.

A one-point conversion occurs through a place kick after a touchdown is scored. For the team to earn one point, the ball must be kicked between the two upright goal posts behind the end zone.

A field goal is when a team decides to opt for a place kick instead of attempting to run or pass the ball for a first down. If the kicker successfully kicks the ball through the opposing team’s goal posts, the team earns three points. If the team wants to score more points, they can choose to attempt a drop-kick instead. A successful drop-kick field goal is worth four points.

A safety occurs when an offensive ball carrier is tackled in their end zone by the defense. In this case, the defensive team receives two points and also gains possession of the ball. A similar situation occurs during a kickoff when the kick returner is tackled in their own end zone before bringing the ball past the goal line. In this case, the kicking team is awarded one point.

Another way of scoring unique to arena football is known as a “deuce.” A deuce occurs on a kickoff when the ball is kicked through the opposing team’s upright goal posts. When this takes place, the kicking team scores two points. Deuces are used in some leagues, including the IFL and NAL, but are not a part of all arena football leagues.

If the score is tied at the end of regulation time, the game goes into a 15-minute overtime period. In overtime, both teams get one possession to attempt to score. If the score is still tied up after both possessions, the next team to score wins the game. The exact structure of overtime can vary by league.

Can arena football players go to the NFL?

Yes, arena football players can go to the NFL. Sometimes, college football players are not drafted by an NFL team and decide to play arena football instead. In total, over 125 players have played in both the NFL and the AFL (Arena Football League). One example is Kurt Warner, who played for the Iowa Barnstormers in the AFL before making it to the NFL, where he made it to three Super Bowls.

How much money do arena football players make?

How many points is a dropkick in arena football?

Why isn’t arena football as popular as the NFL?

Arena football is not as popular as the NFL because of the NFL’s long history and established reputation. Arena football is a more modern game with several characteristics that are different from traditional football, and it often struggles to attract fans who are already loyal to the NFL. Additionally, the AFL experienced a lot of instability throughout its history. In 2009, the league went bankrupt and only had six teams in 2019 compared to the 32 NFL teams. The AFL eventually dissolved in November of 2019.

Is XFL the same as the AFL?

No, the XFL is a football minor league that was recently relaunched in February 2020, after originally being introduced in 1999. The XFL is owned by Vince McMahon, who also owns the WWE. The league has eight teams from locations including Washington, D.C., New York, St. Louis, Tampa Bay, Dallas, Houston, Los Angeles, and Seattle. The AFL shut down and filed for bankruptcy in November of 2019 after over thirty years of operation.

Pages Related to How Does Scoring Work In Arena Football?