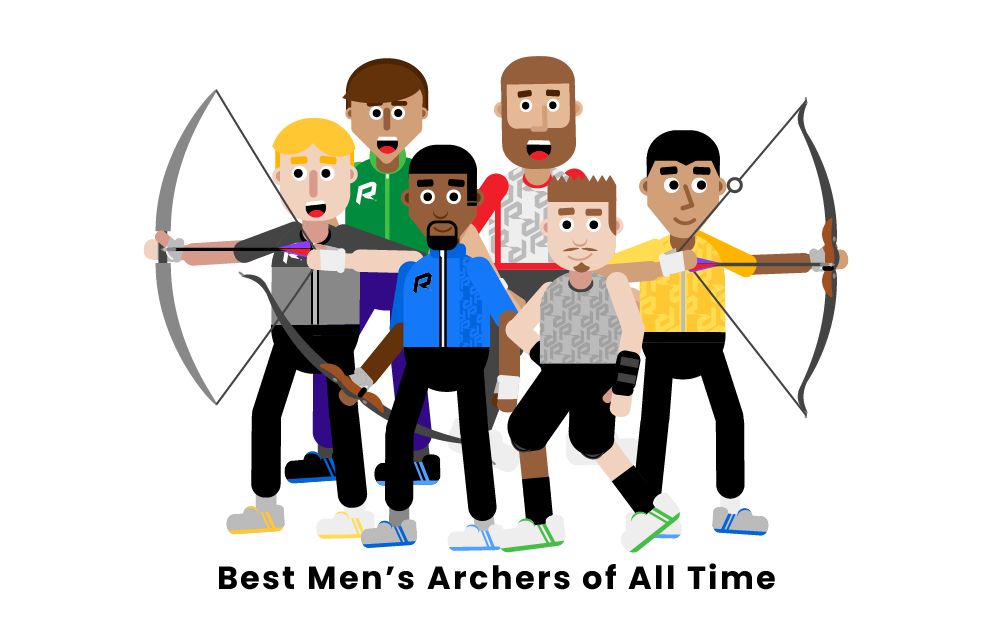 Archery is a precision sport that requires a steady hand, great technical ability, and grace under pressure. This list takes a look at the best men’s archers to ever participate in the sport, winning numerous competitions thanks to their pinpoint accuracy on the range.

Who are the best men’s archers of all time?

Born in 1866 in Elewijt, Belgium, Hubert Van Innis took up archery at a young age and practiced constantly. He rose to national attention at just 16 when he won his first major tournament, defeating much more experienced Dutch and Belgian competitors. At age 34, he competed in the 1900 Paris Olympics, where archery was introduced as an event for the first time, winning two golds and one silver. At the age of 54, he competed in the 1920 Antwerp Olympics, winning four more golds and two more silver medals. Archery would not be an Olympic event again until 1972; however, Hubert Van Innis won the Archery World Title in 1933 and would continue to practice archery until his death in 1961 at the age of 95.

Born in 1956 in Cincinnati, Ohio, Pace took up archery at age 13 and, by age 15, had just missed qualifying for the 1972 US Olympic Team by 10 points. Considered the greatest archer of the 1970s, Pace would go on to win two world championships in 1975 and 1979 and take home the US national championship title six times during the decade. Pace also made history when he became the first to shoot over 1300 points in the 1400 point FITA competition, an achievement made more impressive by the fact that carbon shaft arrows had not been invented yet, and he was using aluminum shafted arrows. Unfortunately, the US boycotted the 1980 Moscow Olympics, where it’s speculated he would have won an easy gold, but he did win gold in 1976 and 1984 and finished off his Olympic career with a silver in 1988.

Born in 1986 in South Korea, Im Dong Hyun, despite his poor vision, quickly became one of the top archers in the world, making his international debut in 2002. He took up archery in middle school and, by 17, was competing on the international stage. He describes seeing the targets as blurry rings of color and just aims for yellow, the center color, denoting the bullseye. However, just because the bullseye is blurry doesn’t mean he can’t hit it. Im Dong Hyun won the Archery World Cup in 2008, has four gold medals in the Asian games and five gold medals in the world championships. He has also collected three Olympic medals in the team event, two gold and one bronze, across three Olympic appearances.

Born in 1983 in Padova, Italy, Marco Galiazzo began practicing archery when he was 13 years old. Just one year later, he won his first competition at the Italian Youth Games. Galiazzo would gain notoriety by winning the gold medal in the men's individual event at the 2004 Athens Games, becoming the first Italian archer to accomplish the feat. Over the course of four Olympics, he would win two gold medals in 2004 and 2012 and one silver in 2008. He also won a gold medal at the 2017 World Championships for the team event and gold for individuals in the World Indoor Championships of 2012.

Born in 1976 in Gallarate, Italy, Michele Frangilli received his first bow in nursery school, and by age ten was already competing in his first archery competition. At 20 years old, he was selected for the Italian Olympic team, where in the individual ranking round, he set a new world record of 684 points out of a possible 720, a record that would stand until 2012 when Im Dong Hyun scored 699. Across four Olympic appearances, he won a gold, silver, and bronze medal, all in the team events. He has won multiple medals outside of the Olympics in other international competitions such as the World Cup and World Archery Championships.

Born in 1975 in Okcheon, Korea, Park Kyung-Mo competed in the World Championships at age 18 and took home the gold for individuals and the silver for the team event in his first-ever international competition. Park Kyung-Mo famously wears sunglasses and is a stoic competitor on the field, unnerving his opponents with his unflinching accuracy and demeanor. With his help, the Korean national team took home the gold medal in the World Championships in 2001, 2003, and 2005. In 2004, he made his Olympic debut, taking home the gold in the team event, a feat he would repeat in 2008 along with a silver for the individual event.

Who is the best men’s archer of all time?

The best men’s archer of all time is Hubert Van Innis. He was a pioneer for the sport, not only competing in the first Olympic archery events, but dominating them, taking home two gold medals and two silver medals. To this day, he remains the most decorated Olympic archer with nine medals despite competing in only two Olympics. His skill also never degraded with age, as he won the world title at age 67 and continued practicing until his death at age 95.

What men’s archer has won the most Olympic gold medals of all time?

What men’s archer has won the most World Archery Championships all time?

Pages Related to Top 6 Best Men's Archers of All Time