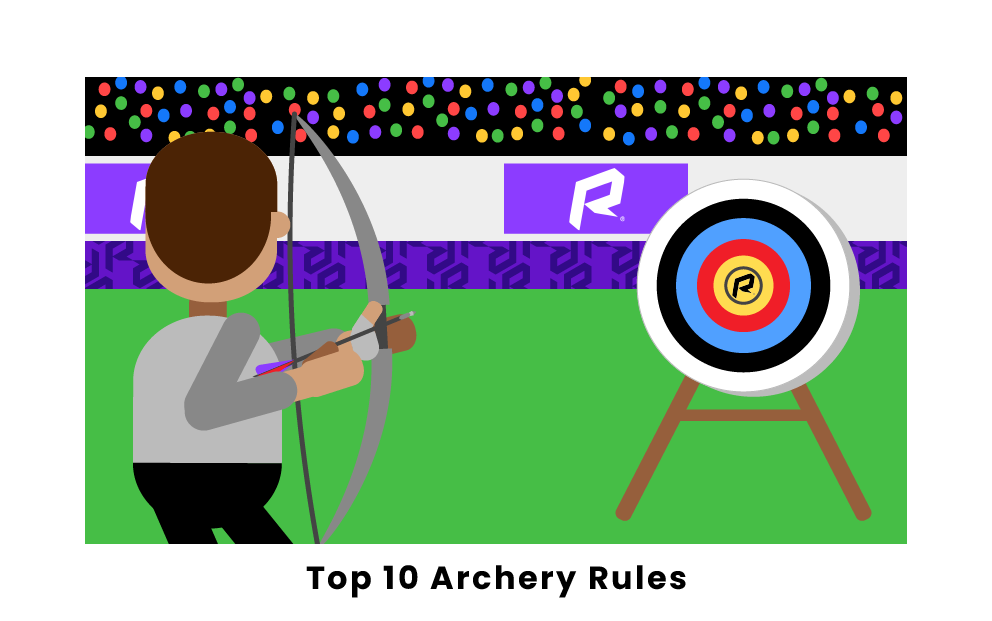 What are the most important archery rules?

In archery, the target is a circle that is different in size depending on the level/age of the competitors. In the Olympics, the target is 122cm in diameter. No matter the level of competition, all targets have the same design.

The targets are composed of ten rings that get smaller as it gets closer to the center. The first two outer rings are white. They are also known as the one ring and the two rings. The next two rings are black, then the next two are blue, the next two are red, and the innermost two are gold.

Each of the rings gets worth more as you get closer to the center gold circles. The innermost ring is worth 10 points and each outer ring is worth one point less. This goes on until the outermost white ring is worth just one point. 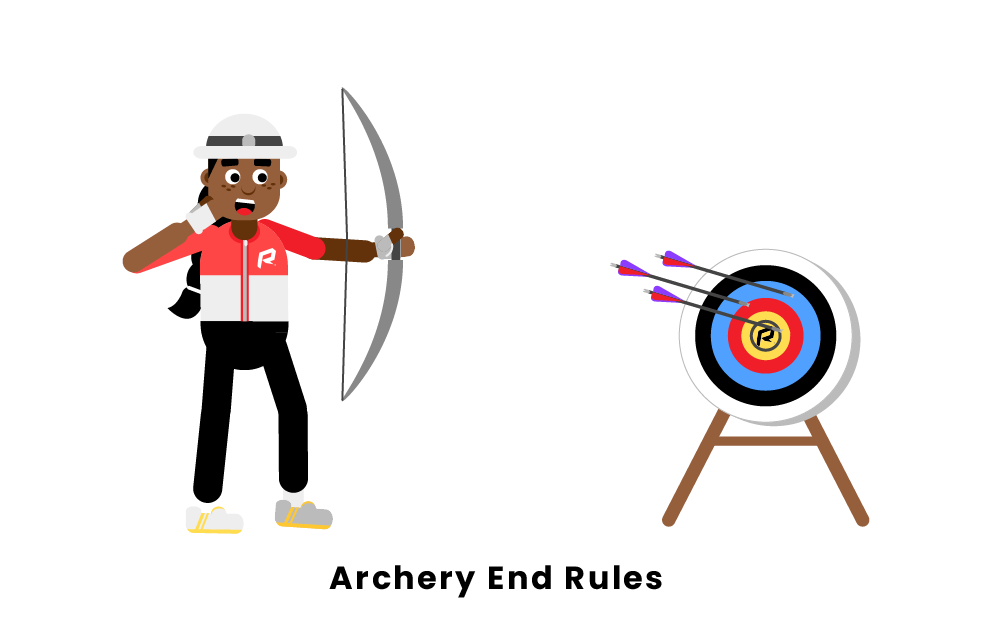 In archery competitions, archers shoot their arrows in rounds called “Ends”. An end consists of shooting a group of three, four, or six arrows depending on the level of competition.

After an archer shoots an end, they’ll go to the target and take their arrows out. In one competition, there might be multiple rounds where competitors shoot ends. The archer is then scored based on the added total of all their arrows throughout the competition.

In the first round of archery at the Olympics, athletes shoot 12 ends of six for a total of 72 arrows. This would mean the highest score possible would be 720. On the other hand, in most professional indoor competitions, archers will shoot 20 ends of three for a combined total of 60 arrows. This means that the max score possible is 600.

If an arrow is shot before or after the time frame, the archer will have to forfeit the highest scoring arrow of that end as a penalty. This rule applies to both team and individual competitions.

In the Olympics there are knockout competitions. Based on the rankings from the first round, each archer faces another archer. In the Olympics the highest scoring archer goes against the lowest scoring archer and the second highest goes against the second lowest and so on. They will shoot five ends of three arrows with the higher scorer of each end getting two “set points.” If they tie, they both get one “set point.” The first archer to get six set points advances while the other is knocked out. The archer that goes undefeated is declared the winner.

In the event of a tie, there are a couple of ways to break it. No matter what though, one winner must be decided. In most competitions a tie can be broken by whichever archer had the most arrows within the inner circle, or 10 pointers. If this number is equal, then they will continue going through the next most innermost circles until one has more.

If on the off chance that all of these are equal, the next way to break a tie is to have a shoot-off. This means that they each shoot one arrow and whoever is closer to the center, wins. The shoot-out method is also how ties are broken in the Olympics. For this scenario, 40 seconds is allowed for an archer to take the tie breaking shot. As you can imagine, this is a very high pressure scenario. 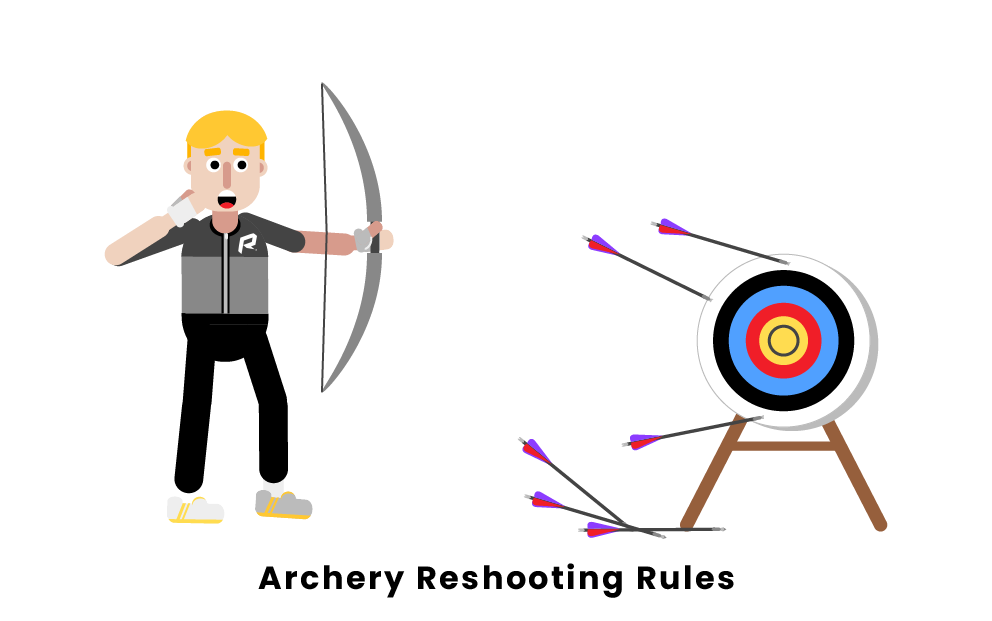 Under most circumstances an arrow cannot be reshot if it leaves the bow. However, it might be considered a misfire or an early release if the arrow falls within the archers reach. If the archer can reach out and grab the arrow, then it is labeled as a misfire/early release. In this event, the archer can fire again with no penalties or consequences.

If an archer happens to drop an arrow while in a competition there is no penalty if it is dropped within three meters of the shooting line. If it is dropped further than three meters then it is considered a miss and the archer will get zero points. No matter where the arrow falls, an archer shouldn’t worry about picking it up until all arrows have been shot in order to avoid any chance of getting accidentally hit by an arrow. 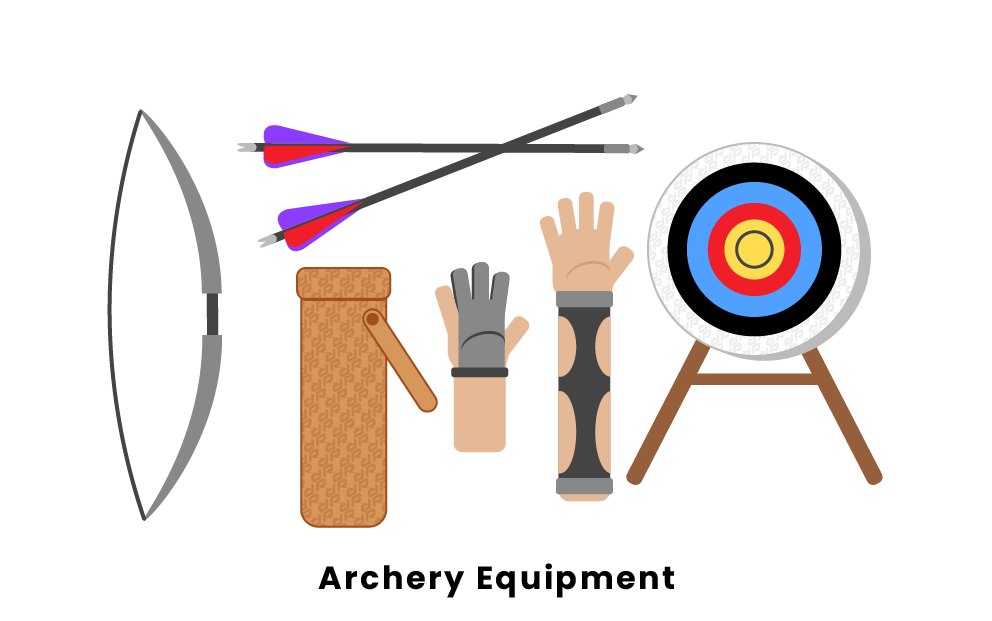 In archery no competitor should have an unfair advantage from the equipment or accessories they use in competition. The bow must have a grip or handle, riser, and two limbs that end in a tip that has a string notch. In the Olympics, archers can only use recurve bows but in other competitions archers can use compounds.

There are generally not many restrictions on arrows in competitions. As long as the arrow doesn’t cause an above average amount of damage to the targets it is fine. For most competitions though archers should make sure to mark their arrow’s shaft with their names or initials for easy identification. Additionally, the arrows shaft should not be larger than 9.3 mm and the diameter of the tips shouldn’t be larger than 9.4 mm.

At every archery competition there are signals to let the archers know when to shoot and when to stop. The first is to tell archers when to move to the shooting line. This is signaled by two whistles. The archers walk up to the line and wait for the second signal. The second signal is one whistle blow and this tells the archers that it’s time to shoot. The final signal is three whistle’s which means the archers can stop shooting and retrieve their arrows from the target. Before they take off the arrows though they should make sure that the score has been tallied correctly.

Another signal that is rarely used is for emergencies. This is either four or five whistle blows and alerts the archers to stop shooting and wait for further instructions. Knowing these signals is extremely important in order to avoid penalties associated with shooting out of time.

In archery competitions there are all sorts of different ways arrows can land on the target that have unique scoring rules. If an arrow lands on the line of a circle, then it will be given the points for whichever circle it’s between that is a higher value. So if it lands on the line between the red and and gold circles, the arrow will count as 9 points.

If an archer misses the target completely in a shot then there will be zero points awarded.

Every archer who is competing against one another must shoot from the same line with their targets an equal distance away. This distance depends on the division of competitors and whether it’s an indoor or outdoor competition. In the Olympics, the target is 70 meters (230 feet) away. For other competitions outside of the Olympics the distance has a larger range. For indoor archery, the distance to the target is 18.3 meters (60 feet) away.

No matter how far away the target is, the target itself will always stand approximately 1.3 meters off the ground.