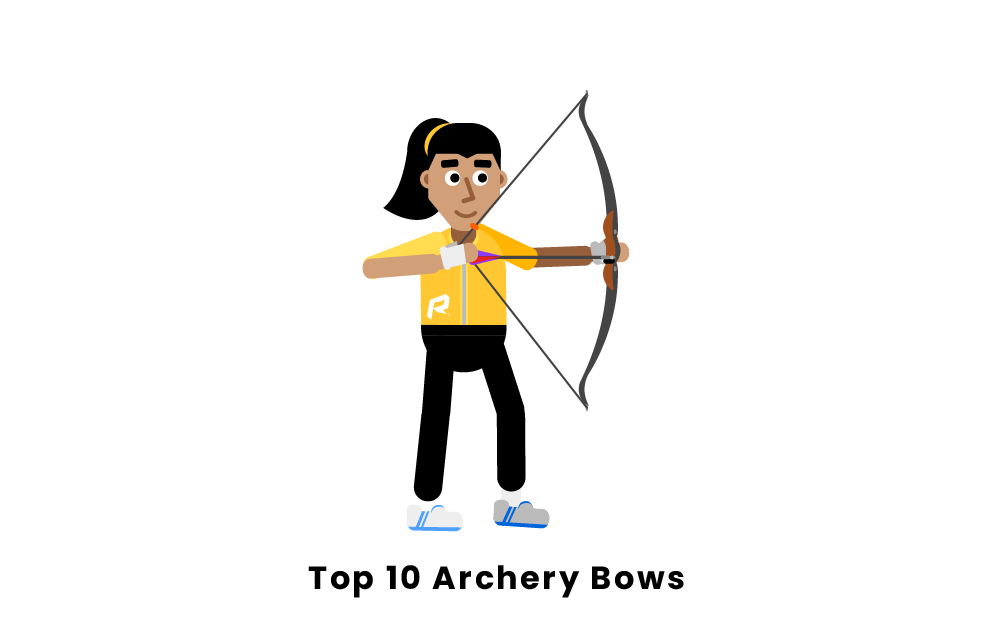 What are the Top 10 most popular Archery Bows?

Hoyt bows are top-of-the-line bows, favored by archers such as American World Champ Brady Ellison. Created by Archery Hall-of-Famer Earl Hoyt, Hoyt bows have risen to become the cream of the crop as far as bows are concerned. With wide selections of longbows, compound bows, and recurves, they sell pretty much whatever you're going to be looking for.

As far as Olympic competition bows are concerned, the Xceed, Alero, and Formula XI risers are their top-end models. You can never go wrong with a Hoyt bow, with some of the best quality around. However, along with Hoyt's incredible technology comes a stiff price tag, with their best models costing around $400.00 apiece. If you're looking to get serious in competition, then Hoyt might be your best bet. On the other hand if you're just starting out with some backyard shooting, some of the models below are a better place to begin your archery journey.

Gillo Archery is an Italian brand created by Michele Frangilli (nicknamed "Gillo"). He's won three Olympic medals, and started producing his own line of bows in 2014. Who better to purchase a bow from than an Olympic champion himself?

The Gillo GQ 25 L is an incredible riser, coming in over ten different colors and styles and produced from a single aluminum bar. It comes predominantly in right-handed styles, but can be purchased for lefties as well. A wooden grip provides unmatched comfort and beauty, and a front-center stabilizer provides perfect balance.

Like Hoyt, Gillo bows come with an unfortunately-lofty price. Though they carry overwhelmingly perfect reviews, the $500-$600 price tag is enough to give all but the most dedicated archers cold feet. However, if your goal is to excel in competitions, then it will truly be hard to find a better company than Gillo.

The DMS is Spiga Sports' most popular riser model. Aluminum body, mounting holes that enable the user to add weight if desired, and an ergonomic wooden grip give the DMS terrific balance and precision. Again, the price is the biggest downside to Spiga models, with all risers costing upwards of $300.00.

The PSE "Razorback" is primarily a beginner bow, ideal for youngsters getting into competitive archery or looking to go out bow hunting with their family for the first time. It comes in three different styles: the "Lil' Razorback", the "Razorback Jr.", and the "Razorback", each intended for different ages up to 15 years old. The limbs detach from a laminated wood riser without needing any tools, making this a great first takedown bow for your child.

The Razorback has an MSRP of $129.99, comes in both left- and right-handed styles, and has a standard bowstring included. All told, an affordable, dependable bow for a young person looking for entry into the sport. You can't go wrong with the PSE Razorback.

The Southwest Archery (SWa) Spyder is a 62-inch takedown bow that can be used for target shooting, hunting, and even bowfishing. The Spyder is great for beginners, but can also be used by intermediates as it comes in several draw weights from 20 pounds all the way up to 60 pounds. Made from two pieces of wood and multiple pre-drilled holes for accessories, the SWa Spyder boasts a classic look and a comfortable grip. The Spyder suits a diverse range of needs and skills, and so is a good bow if you don't quite know exactly what you need.

The Spyder carries a price range of $130-$150, and is durable enough that the price can be considered a great bargain for the amount of use you'll get out of it. It shoots cleanly, is highly customizable, and is an all-around good choice for any archer.

Galaxy Bows is renowned for its high-quality risers and limbs, and specializes in Olympic bows. These bows are terrific for target practice and competition, but they aren't your best bet for hunting. Galaxy sells two complete bows, the "Meteor" and the "Aspire", both of which are takedown bows. They also sell several riser models, such as the Explorer and Crescent, each built specifically with Olympic competition in mind and ranging from $100-$250. The Crescent Riser in particular has received tremendous reviews and offers very good quality for its low price range of $80-$90.

Galaxy also sells several traditional longbow models, if that's what you're looking for.

The Bear "Grizzly" is considered one of the best recurve hunting bows out there. Its limbs are overlaid with clear maple, and comes with hand-crafted tips and a Dacron string. It has been a classic hunting bow since 1950, with a shorter bow length (58 inches and weighing in at 2 pounds) that results in a generally quieter sound, excellent for hunting. The biggest downsides to the Grizzly are that it is not a takedown bow, currently only has a right-handed version, and tends to run more expensive than other models, with an MSRP of $400.00. The one-piece model does make the bow sturdy and durable, and it also comes with draw weights between 30 and 60 pounds. If you are passionate about hunting and you want to go with a classic recurve bow, the Grizzly is quite possibly your best bet.

The Samick "Sage" bow is an excellent choice for beginners. As a result of its high-quality, low cost, and accuracy, the "Sage" has long been considered one of the go-to bows for novices. It is a simple bow, meaning that for somebody just starting out it's perfect as there are no unnecessarily fancy gimmicks to understand. Just, aim, draw, shoot. Its riser is durable and long-lasting, with limbs that can last as a person becomes both more familiar with the sport of archery and more powerful. The "Sage" comes in a wide range of draw weights, from 30 pounds all the way up to 55 pounds. The "Sage" is Samick's most widely purchased takedown bow model and will usually run somewhere in the $200.00 range.

The Infitec "Challenger" riser is an affordable option that will attach to all standard limbs and offers good feel and accuracy while boasting a cost of about $150. A body of solid aluminum and a wooden grip combine for excellent comfort and balance, and has models for both lefties and righties.

The slightly newer Challenger "Neo" was introduced in 2015 and is essentially the same riser, with a few tweaks. A rubberized grip offers an alternative to the traditional wooden one for those who prefer the feel of rubber to wood, and it comes in more colors not available in the general challenger.

This 25-inch riser is great for anybody looking to create their own takedown with limbs of their choosing.

The SAS "Explorer" is a takedown bow featuring fiberglass limbs and an aluminum riser, and is terrific for beginners and intermediates. It comes with draw weights ranging from 22 to 34 pounds. The limbs are also laminated with maple, and the aluminum riser also gives the Explorer great durability. The Explorer is recommended for use among archers standing up to 6 feet tall, well-suited for children and teenagers.

This bow is great for target practice, but the fiberglass limbs mean that the Explorer can also be taken out for hunting as well, a major plus for the bow. The cheap price (costing only $100.00) and terrific durability make the Explorer a go-to bow for beginners, and can last a lifetime. Unfortunately, the one downside is that this bow comes only in right-handed styles.

What is a "takedown" bow?

A "takedown" bow is a bow that can be constructed (and deconstructed!) into three separate components, two limbs and a riser. The riser is the middle part, consisting of the arrow shelf and grip. The limbs extend from the top and bottom of the riser, and the string attaches to the tips of the limbs. Limbs and risers can be sold separately (and assembled as you see fit), or as part of a complete bow. These days, many recurve bows that you see will be takedown bows.

What are the differences between recreational and Olympic bows?

In short, the biggest difference is that Olympic bows are used for competitions and target practice only, while recreational bows can also be used for hunting and are generally not used for competition. Because of this difference in use, Olympic bows have different regulations to ensure a level playing field, and always include a clicker, sight, and arrow rest, components that are sometimes absent from general recreational bows. Olympic bows may seem complicated and expensive, but your local archery shop can help find the right fit for you!

Archery technology has advanced a great deal from humans' first use of bows thousands of years ago, but that doesn't mean that the best bows have hundreds of fancy gadgets to go with them.

In fact, in 2020, some of the top bows are still classic barebows with just a basic riser and two limbs. For high-level competition, Hoyt, Spiga, and Gillo bows are the best bet. Beginners are best served with a bow like the "Samick Sage", the Bear "Grizzly", or the SWS "Spyder.

Is a wood or metal bow better?

Both types of bows have their own advantages. In general, an aluminum or magnesium bow is more durable, is stronger, and usually requires less upkeep than a wooden bow would. On the other hand, a wood bow tends to be quieter and lighter - both big benefits for hunting but not really a concern for target shooting.

At the end of the day, it comes down to personal preference. Some people enjoy the look and feel of a classic wood bow, while others think that metal designs actually look cooler and offer more variety. Almost all competition bows are metal these days, but as far as hunting and recreation are concerned, going with either wood or metal would be a fine choice.