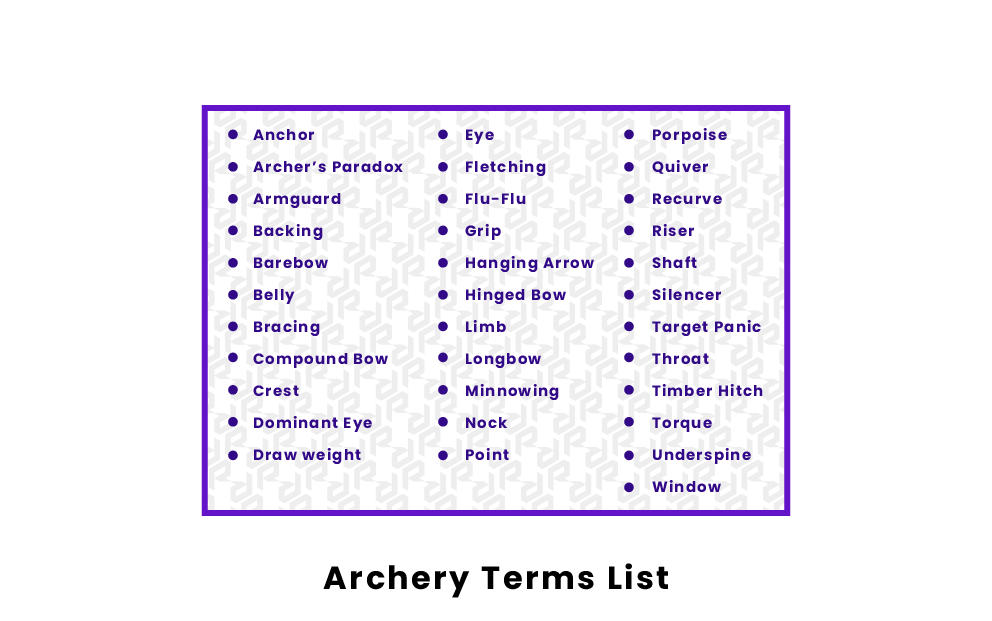 Archery is a sport that features unique pieces of equipment, processes, and terms. The sport has a lot of different lingo that someone not involved in the sport would have trouble understanding. Listed below are the main archery terms related to arrows and bows, shooting lingo, and commonly used techniques. 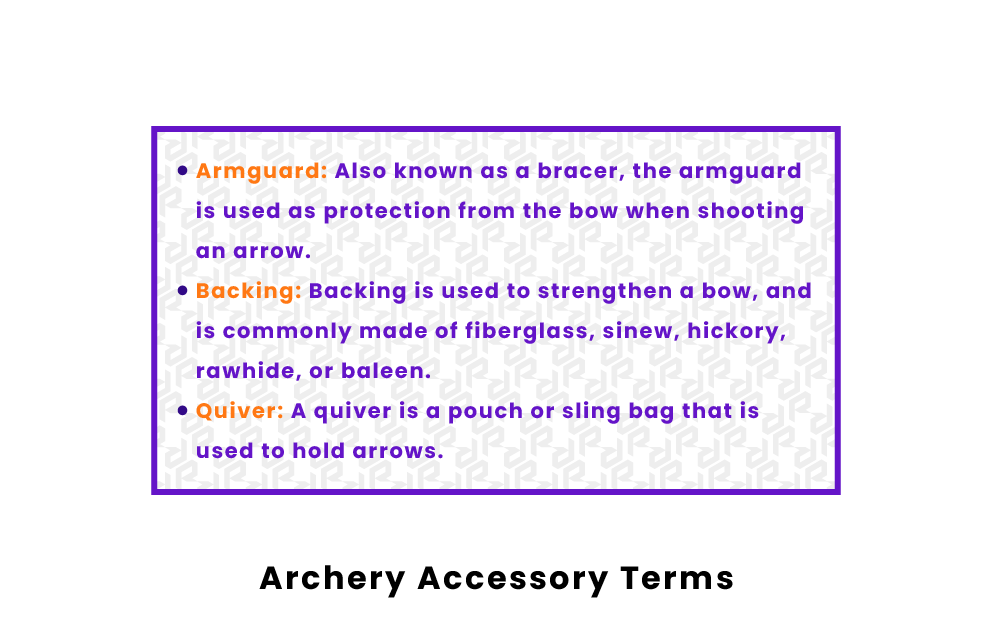 Armguard: Also known as a bracer, the armguard is used as protection from the bow when shooting an arrow. If not careful, the bow can rub up against the arm of the shooter and cause burns or cuts. The armguard serves to protect from this as well as stabilize shooting. It is usually made of leather or plastic.

Backing: Backing is used to strengthen a bow, and is commonly made of fiberglass, sinew, hickory, rawhide, or baleen. The backing allows a bow to last longer and be more secure in its shots.

Quiver: A quiver is a pouch or sling bag that is used to hold arrows. Quivers can be very useful outside of competition or when hunting to easily transport arrows. Quivers are usually designed to be comfortable for the wearer and protective of the arrows. They should provide quick and easy access to arrows. 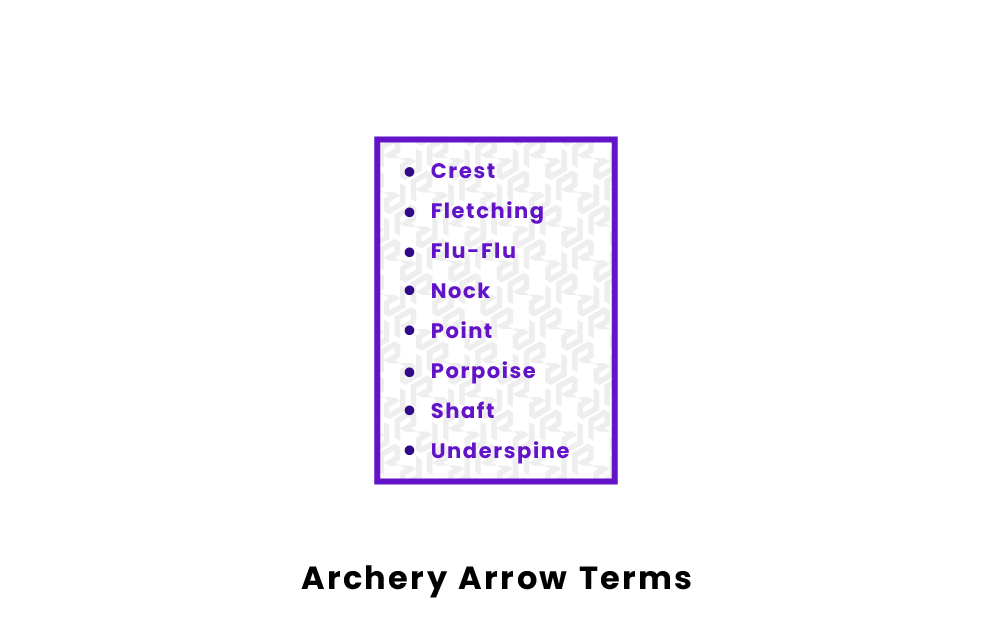 Fletching: The fletching of an arrow describes the feathers or tabs that are typically seen at the back end of arrows. The fletching is attached so that the arrow flies straight and fast, and guides it through its flight.

Flu-Flu: Also spelled “floo-floo”, flu-flu arrows are specifically designed so that they do not travel as far as a typical arrow in flight. These arrows differentiate in the fletching, as flu-flu arrows have larger and spiral designed fletching and feathers that help to create drag in the flight path.

Nock: The nock of an arrow is the piece at the back end that attaches to the bowstring when preparing to shoot. The nock is typically a plastic or other firm material that makes drawing the arrow back easy, and keeps the arrow in position on the bowstring.

Point: Another part of the arrow, the point is opposite from the nock in terms of positioning. The point of an arrow is the farthest point forward, and is usually a small metal circle of tip that makes up and protects the front of the arrow.

Porpoise: Porpoise refers to the up and down movement of an arrow during its flight. This motion is generally an undesirable characteristic, as a more stable and direct flight path is best for an arrow.

Shaft: The shaft refers to the main body of an arrow. This is the portion of the arrow between the point and the back fletching. Sometimes an arrow itself may be referred to as a shaft.

Underspine: Underspine is the term given to arrows that are said to be too flexible or too light for the bow from which they are being shot from. This is opposite from arrows that are “overspined”, suggesting that the arrow is too stiff for the bow. 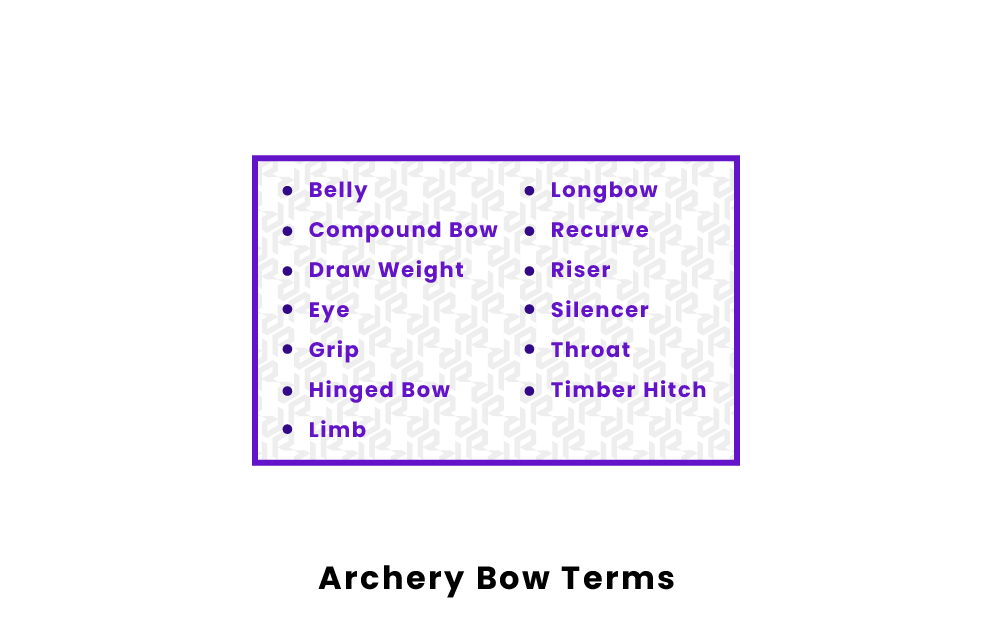 Belly: The belly is defined as the inward facing side of the bowstring when taking a shot. The belly is facing the archer when the bow is drawn back.

Compound Bow: A compound bow is a complex bow design commonly used in competitive archery and hunting. Compound bows include a system of pulleys and levers that minimize the weight or force required to draw the bow into shooting position. However, compound bows will be heavier overall due to the added features.

Draw weight: The draw weight is the measure of the weight, typically in pounds, required to fully draw a bowstring back so that is ready to be fired. Bows with higher draw weights are harder to handle and control than bows with low draw weights.

Eye: A bow often features small holes or openings on either end. These openings are called eyes, and serve to allow the bowstring to be looped and tied around the bow as a whole.

Grip: The grip is the part of the bow that is held by the archer. This is often covered in leather or another comfortable material. The grip helps provide stability in the archer’s form, and is most often held in the non-dominant hand.

Hinged Bow: A hinged bow is a type of bow that is designed for travel. Hinged bows feature a hinge attached to the back of the bow that can connect to other accessories to facilitate transportation.

Limb: The limbs of a bow are made up by the upper and lower portions of the bow. These parts are the two parts directly above and below the riser. The limbs stem from the center part of the bow and are the parts that most arch and store a shot’s energy.

Longbow: A longbow is a traditional type of bow that typically measure 5 feet or longer in length. Longbows are generally straight from upper to lower limb, so the bowstring does not touch the limb when braced.

Recurve: Recurve refers to the type of bow that involves an arch starting from either end of the riser and curving outwards to the ends of the limbs. The bow looks as if it is curved twice, since the ends of the limps curve outwards, away from the archer. Recurve bows are able to efficiently hold and transfer energy from the bow to the arrow.

Riser: The central part of the bow makes up the riser. The riser will always be fully stable and will not move or bend when drawing the arrow and pulling the bowstring back. The riser ends at the start of either limb.

Silencer: Silencer is made up of added layers of material to the bowstring that serves the purpose of stopping the vibrations created by release of a drawn back arrow, thus quieting the noise created in this process.

Throat: The throat is part of the bow, more specifically part of the grip in which the archer wraps his or her thumb and index finger around. This part is often tapered to provide better grip and stability of the bow as a whole.

Archer’s Paradox: A phenomenon unique to archery, the archer’s paradox has to do with the moment the arrow is released from the bow. Upon the shot, the arrow has to go through the point at which it begins traveling. This visual appears as a winding, bending arrow in slow motion that ultimately travels in a straight line path.

Barebow: If an archer shoots barebow, this means he or she is taking a shot with no assisting sights or aids for releasing. Barebow bows typically look “bare” of any added technology, hence the namesake.

Hanging Arrow: When an arrow is shot and hits the target but does not penetrate it, but does not fall off the target, this is called a hanging arrow. Hanging arrows are pretty rare, but still occur every now and then. 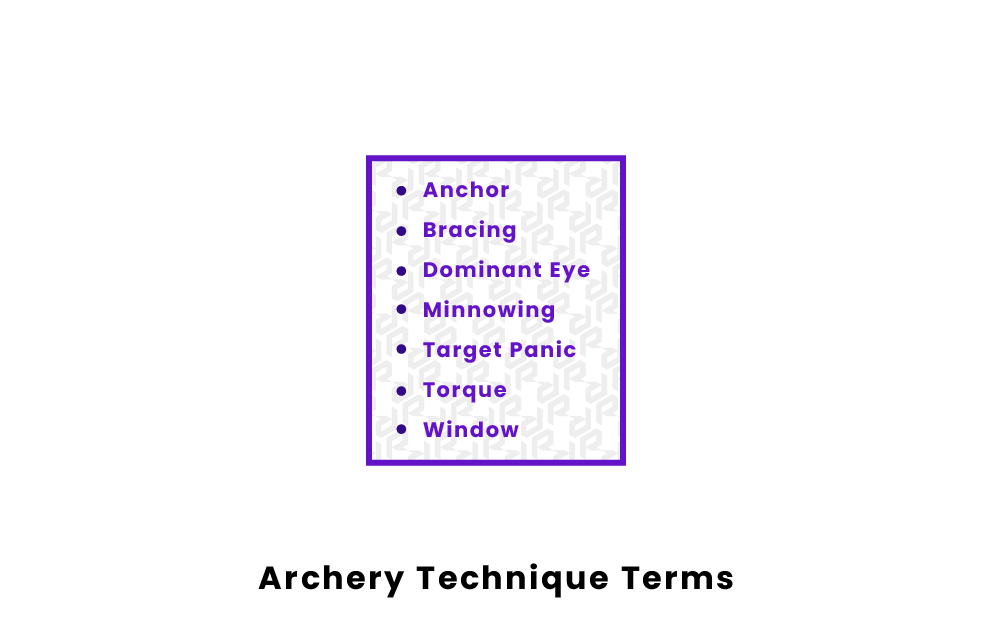 Anchor: The anchor or “anchor point” is the point in an archer’s stance where the bow is drawn back and held right before it is shot. The anchor is typically around the jaw or cheek area, and consists of aligning the nock and string into certain positions that feel best for the archer.

Bracing: The act of bracing is the process by which someone attaches the bowstring to the bow itself. This may involve several tedious loops created to maximize the energy storage and release of the bow.

Dominant Eye: In many sports, athletes note their opponent’s dominant hand or foot used for shooting. In archery, athlete’s focus on the dominant eye, which is typically parallel to their dominant hand.

Minnowing: If an arrow is said to be minnowing, the arrow moves side to side at a high speed during the flight. This is indicative of a poor clearance, or failure of the arrow to clear the bow when shot without the fletching brushing up on the bow or the bowstring.

Target Panic: Target panic happens when the person shooting an arrow loses control over the release. This is most commonly seen when an archer shoots the arrow before drawing the arrow back all the way.

Torque: A physics term related to turning or circular motion, torque in archery refers to the typically unintentional turning of the bow when attempting to shoot an arrow. This results in off-target or inaccurate shooting, and can be frustrating if it is a common occurrence.

Window: The window denotes the area in which the archer looks when firing an arrow. This space is in the riser right above the grip, or between the side of the bow and the string of the bow when it is fully drawn.